Millions of Americans spend a considerable amount of time behind the wheel each year. In fact, 8.1 percent of U.S. workers who worked outside of the home had at least an hour-long commute in 2011, according to U.S. Census numbers.

Even though biking and walking are popular alternative forms of transportation for some, our vehicles are still the go-to method for getting around town. Get in, sit down, buckle in and fire up your smart phone’s navigation to figure out how to get to your office on the first day of your new job. Technology can definitely help us find our way on the road, but those green and white signs above the freeway are about as certain as death and taxes. Have you ever wondered who designed those, and why each traffic sign tends to look the same no matter where you go in the country?

Here are five things to know about our nation’s traffic signs:

1. Traffic signs are designed with safety in mind. In the early 20th century, the first mass-produced automobile made its debut in the United States. People were fascinated with the machine, and soon travelers began to set out and explore, only to end up confused and lost instead. So, a number of horseless carriage owners got together in New York City to form an automobile club, and help drivers get around by placing road signs along local highways. 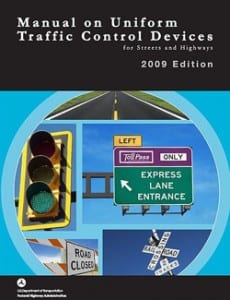 In the 1920s, representatives from Indiana, Minnesota and Wisconsin decided to create a basis for uniform road markings and signs, and toured several states to report their findings to the Mississippi Valley Association of Highway Departments. This resulted in the first set of standards for sign shapes, many of which we still use today. In 1932, the American Association of State Highway Officials (AASHO) and the National Conference on Street and Highway Safety (NCSHS) formed the first Joint Committee on Uniform Traffic Control Devices, in an effort to standardize the sign, shape and color of traffic signs across America. The first Manual on Uniform Traffic Control Devices (MUTCD) was published in 1935, and state transportation departments across the country use this manual when creating their road signs. Road surface markings, traffic signals and signs in each state must conform to these national standards, including size, colors, shapes and fonts used in the devices.

2. Traffic signs are consistent no matter where you go. Isn’t that nice to know? If you’re taking a road trip from Seattle, Washington to Ft. Lauderdale, Florida, each traffic sign is going to look the same, helping you reach your destination. Highway guide signs are green with white lettering, parking signs, including signs for parking meters and permits, are white with green lettering, and warning signs are yellow with black lettering.

3. Individual states can supplement the national standard for roadway markings. While the MUTCD plays an important role in dictating standards for the design, implementation and maintenance of traffic control devices, State transportation departments can supplement these standards for their own, unique purposes. Next time you’re driving along the interstate, take a look at those electronic message boards spanning across the lanes. While many major cities tend to use them, their purposes could be vastly different. In Utah, UDOT’s Variable Message Signs (VMS) display current travel times 24 hours a day. During times of poor air quality, these VMS will instead display a message to “Travel Wise”, by encouraging drivers to limit their driving, or to use public transit. The MUTCD provides a set of guidelines for messages displayed on these electronic signs, but it’s up to the state to determine what messages are displayed for drivers.

4. Figuring out the Interstate numbering system can help you get around. I-15, I-515, I-5 – do you know these freeway designations mean? If you take some time to understand the numbering system, your next vacation might run a little more smoothly.

Here are some facts to keep in mind:

5. Other countries use their own standards for traffic signs and signals. In 1978, the Vienna Convention on Road Signs and Signals came into force across many locations in Europe, in an effort to standardize road markings, traffic lights and road signs. Canadian road markings and traffic signage are similar to American road signs, but may include bilingual phrases in certain jurisdictions.

I spent some time working for the Utah Department of Transportation a few years ago, and learned quite a bit about what goes in to running an efficient transportation system. What struck me the most about traffic signs is the fact that consistency plays a large part in the safety and mobility of Americans. Signs are an important component to the economy, and whether it’s the “No Parking” sign in front of your business, or the Variable Message Sign on the freeway, a simple and clear message can make a world of difference.

Andrew James is the owner and managing editor of 24 Salt Lake, a Utah news and information site based in Salt Lake City. For a look at traffic incidents across Utah, click www.24saltlake.com/traffic.