As a continuation of our Success Stories series, I recently had the privilege of sitting down with Brad and Monnica Manuel, co-founders of Operation61, a non-profit organization dedicated to the eradication of human trafficking to talk about their organization and their thoughts on building a successful non-profit.

When did you first become aware of human trafficking?

Monnica: We had heard little pieces here and there. One trigger was the movie, “Taken,” which made us start asking more questions, doing more research. We originally had the mindset that it was a third world country issue. There are 27 million slaves worldwide (that includes sex slaves and labor slaves). Then we began to break it down to what’s happening here domestically. Somewhere between 100,000 and 300,000 children are sexually exploited in the United States every year. We wondered if it was happening in Utah. We found out that there are organizations that are assisting victims right here in our own backyard.

What does your name mean?

Monnica: Our name comes from the scripture Isaiah 61:1, which says, “The Spirit of the Lord is upon Me, because He has anointed Me to preach good news to the poor; He has sent Me to heal the brokenhearted, to proclaim liberty to the captives and recovery of sight to the blind, to set at liberty those who are oppressed.” That scripture was written in 700 B.C. More than 700 years later, when Jesus came out of the wilderness, he quoted the scripture and said that it stated his life’s purpose.

We thought, it doesn’t have to be more complicated than that. You just ask, “What does your life represent?” If that scripture was Jesus’s purpose, it could be ours, too. We started thinking about ways to live according to Isaiah 61:1.

Brad: Once we realized how prevalent and local the issue of sex trafficking is we thought the timing was perfect. The main message of the scripture was freedom. Sex trafficking is the epitome of bondage – individuals being bought and sold as a product. Many victims don’t even know what freedom is like.

Is your organization part of a church?

Brad: When we first came to Utah, Monnica had just graduated from bible school in Southern California. We wanted to found a church, which we did. In the beginning, Operation61 was under that church’s 501(c)(3).

Monnica: Eventually we realized that we wanted the organization to be more inclusive and involve all of the community. We wanted to serve everyone, without strings attached. Though we’re faith-based, we feel that everyone can be involved with Operation61. Regardless of your background or faith, everybody as a human can get behind our mission.

How did you get the organization started?

Brad: At first, we had no idea what we were doing. Monnica is a runner, and we’d seen other people doing charity races. So we thought, “Let’s do a charity race and go from there.”

You start with an idea. Then you start developing some advocates around you. Some people that want to get onboard with what you’re doing. In our small community we immediately had quite a few people that said, “Let’s get behind this and create something.” We identified a couple of organizations that we could get behind – one local and one international. We began to try to raise some awareness.

In December of 2008 we had the opportunity to meet some needs of local victims that had been trafficked. They were getting assistance from a local partner. Two days before Christmas we learned that they were in need of clothes, food, and other essentials. We were made aware of the issue and just reacted to it. We were able to provide clothing, personal hygiene items and some gift cards. At the same time, we were planning our first race.

Monnica: We got the plan started. We got real clear about what our mission was. Then we knew our objective. We didn’t yet know what shape that would take, but we knew it would evolve. We articulated our plan into a mission that people could see and understand easily.

What is your mission?

Monica: Our mission is three parts: Reach, Rescue and Restore.

Reach involves education and going to the root of the problem. Letting people know that the problem exists, that it’s very widespread, and that they have a personal impact on sex trafficking.

Rescue involves the actual extraction from bondage – providing girls with a safe place to come when they leave the situation.

Restore is what happens next. How do you keep the girls from going back? You have to give them something to go to.

Looking back, what would you do differently in the beginning?

Brad: What we didn’t do is narrow it down and evaluate our core competencies. We tried to do everything. It’s like a business. As soon as you start developing, you better put some structure and business principles around it. You need to lay it out with a plan.

We finally sat down and said, “Let’s figure out who is in our group what talents do we have; let’s not try to do something that isn’t us. If it’s not something we’re not good at, let’s find someone who is and support them.”

Monica: We asked, “Where can we have the most impact?” It sounds simple, but we didn’t distill it down like that in the first couple years.

How did Operation61 grow and develop?

Brad: We looked at our group and at our core competencies. Many of us have business experience and we have a lot of creativity on our staff. And most of us are parents.

We’re not a victim services organization. We partner with other organizations that are better set up for counseling and working with victims. Our support partners are the  primary recipients of our financial support. For instance, “Generate Hope” in San Francisco has a 17 bed safe house. It has proven programs for victims of sex trafficking and is one of only two homes of its kind in the U.S. They also do outreach programs to help victims become aware of options to leave sex trafficking situations.

Monnica: So other organizations have the facilities set up for the “Rescue” and “Restore” parts of our mission. We help them financially, but aren’t set up for the actual labor involved there. We thought, “How are we best equipped to help with this issue?” And we realized that we can focus on the “Reach” part of the mission through education. We are parents. We would hate for any of this to happen to our children. We would hate for our sons to be consumers in the industry.

Brad: The sex trafficking business has a cycle: Demand, Manufacture, Marketing, Distribution, and Consumption. And it’s all about supply and demand. So how can we affect the demand?

We relaunched our website on May 12th with all new content after working on it for seven months. Our focus is to provide educational tools to combat the issue at the root. We want to educate parents on how to help their children avoid being part of the business cycle of sex trafficking. We want to affect change at the root, at the demand side of things.

Monnica: The new launch is our attempt to create awareness from a different perspective. To provide tools to parents. To open the eyes of parents to the reality that kids are having conversations through Facebook, Twitter, etc. all the time.

As a parent, you have to guide kids, lead them through life. If that means you have to be on Facebook, Twitter, whatever, to follow and guide them, then you’d better do it. Kids are learning how to communicate in a totally different way than parents ever knew how.

Brad: When we hand kids all this new technology, we expect and trust that they’ll teach us how it works. We have no idea what they’re doing. It’s important to explain things to kids; they don’t understand some of the consequences of technology. You have to walk the pathway out for them mentally. Let them understand. We know as parents what can happen with this much information, we’d better prepare our children.

So we created documents, downloadable PDFs on the website, to help parents. We have a document that lists warning signs for boys and girls and why they’re warning signs. We have a “House Rules” document. It contains rules that parents can implement in regards to handling technology. For instance, what they should/shouldn’t communicate online. Some rules may seem strict, but do you really want your child downstairs in his bedroom at night, having a conversation online with a stranger?

What do you want people to know about human trafficking?

Brad: People can get on our website: Operation61.org. They can explore the business wheel that gives more information about each part of the sex trafficking business cycle: Demand, Manufacture, Marketing, Distribution, Consumption. Then they can click the “Take Action” button and resolve to join the fight to end the demand that makes child sex trafficking possible. They can subscribe to our newsletter and also get involved by volunteering with Operation61. There is a “Contact Us” form on the site. 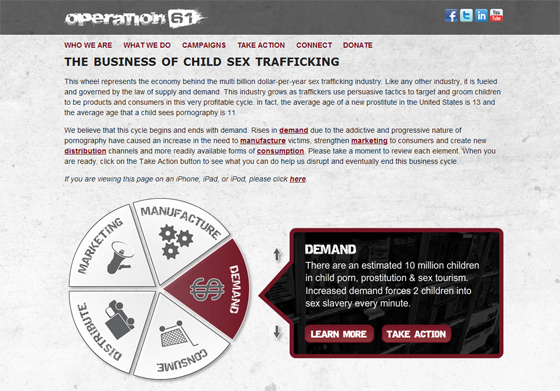 Monnica: I think the most important thing for people to know is: This impacts you in some way. Find out how and do something about it.

What advice would you give to people in the beginning stages of starting an organization?

Brad: Figure out where you can start foundationally. Identify core competencies, get good at them and then build on that. It has to be a comprehensive approach. Be aware of other partners. Work together in collaboration instead of trying to tackle the same issues others are tackling.