This article is the first in a series discussing specific company logos, their designs and histories. The definition of the word logo is, “a graphic representation or symbol of a company name, trademark, abbreviation, etc., often uniquely designed for ready recognition.” (1) The best logos, used consistently, provide a strong corporate identity of the businesses they represent. Eventually, a company’s logo becomes a complex symbol that represents associated meanings and values apart from the actual company and its product. A logo can induce emotional reactions, memories and even moral judgements. 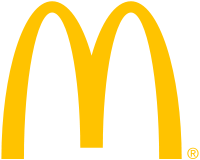 The McDonald’s logo has a humble beginning. In 1952, brothers Richard and Maurice McDonald wanted to create a distinctive building design that would make their hamburger restaurant stand out. They wanted the building to act as an advertisement itself, providing immediate recognition to customers as they drove by. Stanley Clark Meston was chosen as the architect for the project.

Alan Hess, author of Ultramodern Roadside Architecture, notes that fast food restaurant owners in the past had figured out a way to garner attention:

“To make a relatively small building visible to customers from far down the street, roadside businesses learned to manipulate architectural scale by conceiving of the entire building as a sign. Since the 1920s this strategy had produced a series of buildings in the shape of giant objects, an architectural onomatopoeia of fruits, foods, animals, and clothing. Their size and often their simple shapes created buildings that were difficult to ignore.” (3)

So how could the McDonald brothers replicate the same visibility that roadside food stands of the past had successfully created? Richard McDonald sketched out a rough concept that included two half arches—one on either side of the building. Viewed at an angle, the two arches formed an “M.”

Meston designed the first building that featured an exterior of red and white tiles and plenty of glass. The two arches stood 25 feet high and were constructed of aluminum painted a bright yellow. They were dressed with neon to provide visual impact day and night. Alan Hess notes, “Though the design shared elements with other roadside stands dealing with similar programs, the arches spearing the wedge roof created a unified, distinct architectural design. They turned the entire building into a sign.”

An early version of the golden arches logo was evident in the sign in front of that first restaurant. Constructed from another yellow arch, the top of the sign featured “Speedy” and the two yellow arches, with the roof line transecting them.

Unlike the logos of today which are created by a team of design and marketing professionals, the McDonald’s logo grew from an architectural detail that was created by a man with no architectural training. Richard McDonald simply wished to add a detail to his restaurant that would allow it to be seen from the highway. Hess says, “To McDonald, the arch was an arbitrary form, without symbolic or historic associations, which he hoped would come to symbolize McDonald’s.”

In 1962, designer Jim Schindler was hired to create a more “corporate” logo. He designed the golden arches logo most recognizable today, but based it on the previous representation of the arches that was on the Speedy sign.

Now, the logo not only identifies every McDonald’s restaurant, it provides a rich back-story in the minds of consumers. With the globalization of McDonald’s comes an identity of consistency and American culture. The food offered at McDonald’s is as consistent as possible, given the particular community values and tastes for the location in which each restaurant resides (for instance, McDonald’s restaurants in India do not offer hamburgers, since the culture does not allow for the consumption of beef). However, an order of french fries at a McDonald’s in Bangalore, India and one in Duluth, Minnesota will be almost identical in flavor, texture and presentation.

Outside the United States, McDonald’s represents America. When McDonald’s builds it first restaurant in another country, the word “Americanization” is often bandied about. More than just an innocuous fast-food hamburger joint, McDonald’s represents many of the principles the rest of the world associates with America: homogenization, consistency and inexpensive food served fast.

This bringing of American culture to the rest of the world has been met with accolades and plenty of criticism. Maoz Azaryahu writes:

Other articles with similar observations have been written in regards to McDonald’s and its introduction to countries such as China, India, Pakistan, France, Poland and Greece. McDonald’s restaurants are currently found in 119 countries.

Whether the introduction of McDonald’s is a positive or negative change is a decision to be made by the people of the nations in which the restaurant opens its new stores. Regardless, the McDonald’s logo identifies the company and symbolizes much more than hamburgers and french fries.