When you think of the bright lights of New York City, chances are that you’re thinking about Times Square. The most popular tourist destination in the city, Times Square has 39 million visitors every year. The famous, brightly lit signage gives the square its personality and has helped make Times Square a New York icon. It’s always been a place for signage; but the signs have evolved over time to capitalize on the latest technology.

Longacre Square: Then and Now

The Astor Hotel was completed in 1904, and brought new social graces to Longacre Square. The hotel encompassed an entire city block (over 35,000 sq. feet), contained over 1,000 rooms and had multiple ballrooms and restaurants.

Since the new addition of the Astor Hotel made the area much more exciting, the owner of the New York Times, Adolph S. Ochs decided to move the newspaper’s operations to a new building. Times Tower was less than a block from the Astor Hotel. Mr. Ochs convinced mayor George McClellan to rename the area Times Square, in honor of his newspaper.

On December 31, 1903, a fireworks display was set off on the roof of the building, kicking off a tradition that still continues today. Now, the building is known as One Times Square, and it certainly looks a lot different today:

Mr. Ochs also convinced Mayor McClellan to put a subway stop at Times Square, which led to even more growth and development. The mosaic signs were installed in 1904, when the NYC subway system first opened.

Though the mosaic sign is still present and in pretty good shape, the most noticeable signage for the 42nd Street subway station is a little glitzier now:

Duffy Square Now and Then

Duffy Square is the triangle island that sits right in the middle of Times Square, between 45th and 57th Streets. There, modern tourists will find the TKTS building (a great place to buy same-day discount tickets to Broadway and Off-Broadway shows) and can get a great view of One Times Square and its surrounding neighbors.

Though it was nowhere near as sophisticated then as it is now, in 1904 Duffy Square did sport a few signs with incandescent bulbs. These signs replaced the hand-painted wooden signs of just a few years prior. The addition of so many lit signs gave Times Square the nickname “The Great White Way,” which was not necessarily a positive moniker; many people felt that so many lighted signs ruined the aesthetic.

The Camel billboard was an icon in Times Square from 1941 to 1966. It was installed on the exterior of the Claridge hotel, at the corner of Broadway and 44th. The man on the billboard blew huge, five-foot “smoke” rings generated by a machine placed behind the sign. The machine created rings of steam that released out into Times Square every four seconds.

During WW II, the man on the billboard was depicted as a soldier, sailor and airman. 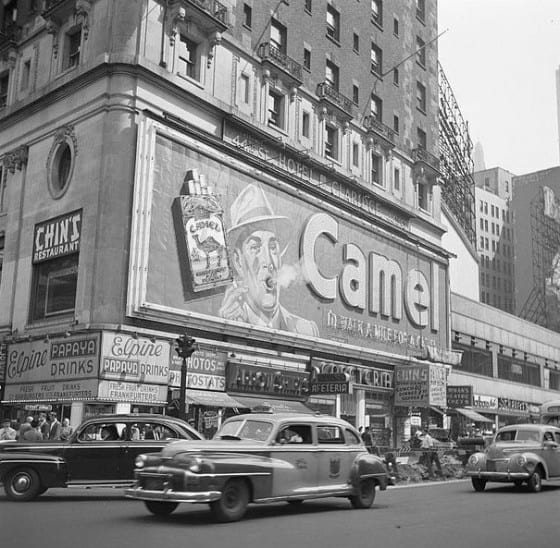 In April, 1999, billboards advertising cigarettes were removed in 46 states as part of a $206 billion agreement between those states and tobacco companies. But well before then, the Claridge hotel had been replaced by a movie theater, and more recently, the space was taken over by a filming studio for Good Morning America, whose signage reflects current trends in Times Square:

In the 1970s and 1980s, Times Square fell into disrepair. Buildings went vacant and many of the shops that were open were selling pornography or showing X-rated films. The area was definitely not a tourist attraction.

The 25,000 square-foot M&M World store is the largest candy store in all of New York City. With its rainbow of candy-coated goodness, it’s a kid’s dream:

The signage in Times Square continues to change due to new technology. In 2008, the first sign powered exclusively by nature was installed at the corner of 42nd Street and Seventh Ave. Four wind turbines and 45 solar panels powered the sign by Ricoh:

At over 9,000 square feet, the LCD NASDAQ sign is the largest continuous sign in Times Square. It most certainly will be eclipsed by even newer technology as the signage industry continues to innovate.

Do you embrace the newest technology, or prefer something more quaint and historic? Is your favorite loved because of its flashy lights and design, or because it evokes a warm, happy feeling of one of the greatest cities in the world? Let us know… leave your comment below!