You are currently logged-in as customer

Professional malaise is exceedingly common: Only half of employed Americans feel satisfied with their jobs. But do employees' frustrations stem from their actual duties or the obnoxious behaviors of their colleagues? Research suggests that office politics, co-workers' attitudes, and brutal bosses represent some of the most pressing challenges in the modern workplace. From inadvertent faux pas to outright offensive behaviors, how are workers typically affected by their colleagues' unpleasant actions?

We were determined to explore the violations of workplace decorum from two distinct perspectives, incorporating the experiences of both bosses and average employees. We surveyed over 800 people in both categories, gauging which workplace behaviors they found most irritating. Going further, we investigated their experiences in ethical gray areas, from talking politics at the office to romantic entanglements with fellow employees. Do any of your habits at work strike our respondents as unacceptable? For a singular view of the etiquette and ethics of professional behavior, keep reading.

Emails in the Evening 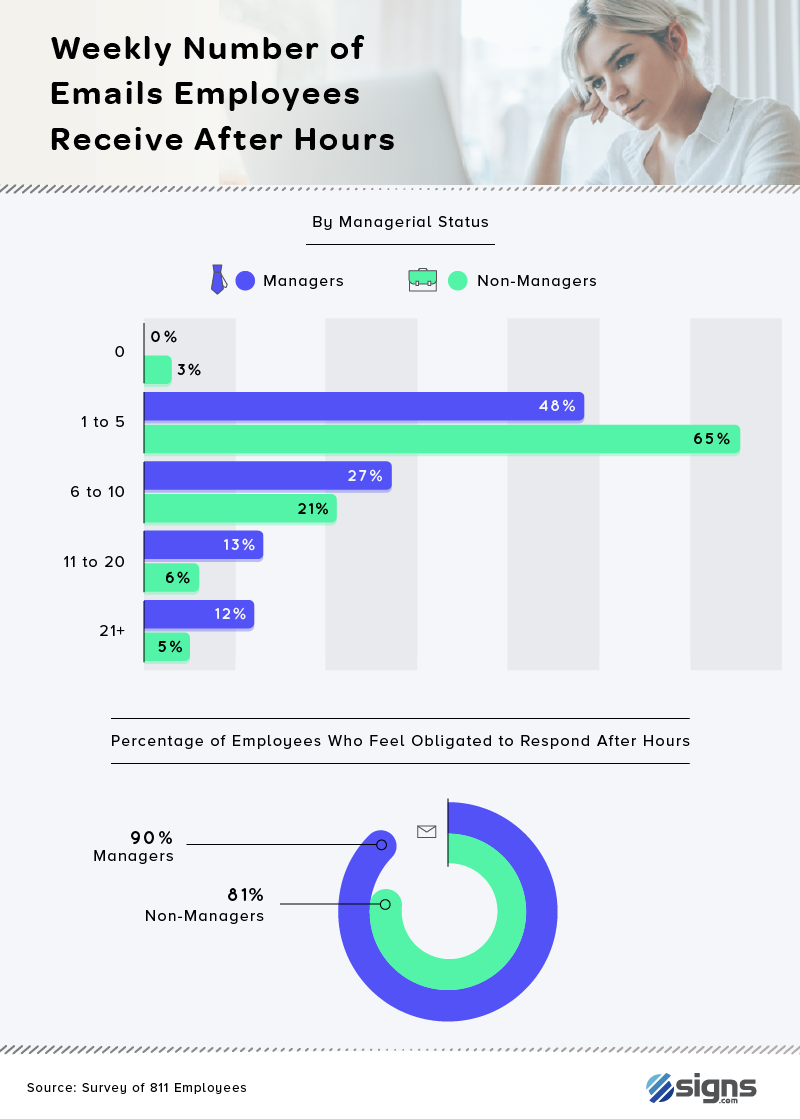 In recent years, the unending onslaught of work emails has attracted much concern: New York City legislators have even considered a law prohibiting most companies from requiring employees to check their inboxes after hours. Our data suggest that many workers receive several emails each week outside of working hours – and very few employees are spared entirely. Indeed, just 3 percent of non-managers said they received no work-related emails after hours. All the managers surveyed reported receiving at least one after-hours email each week.

Managers were significantly more likely to report high volumes of email after the official workday ended. A striking 12 percent of bosses said they got 21 or more emails each week after hours, whereas only 5 percent of non-managers said the same. This inbox inundation is likely an unpleasant byproduct of increased responsibility: Managers must be accessible to their direct reports as well as their own superiors. But bosses might also be contributing to this dynamic by sending late-night emails themselves – causing the workers they supervise to reply after hours as well. Indeed, while managers were more likely to feel they had to respond, 81 percent of non-managers also felt obligated to reply promptly to after-hours email. 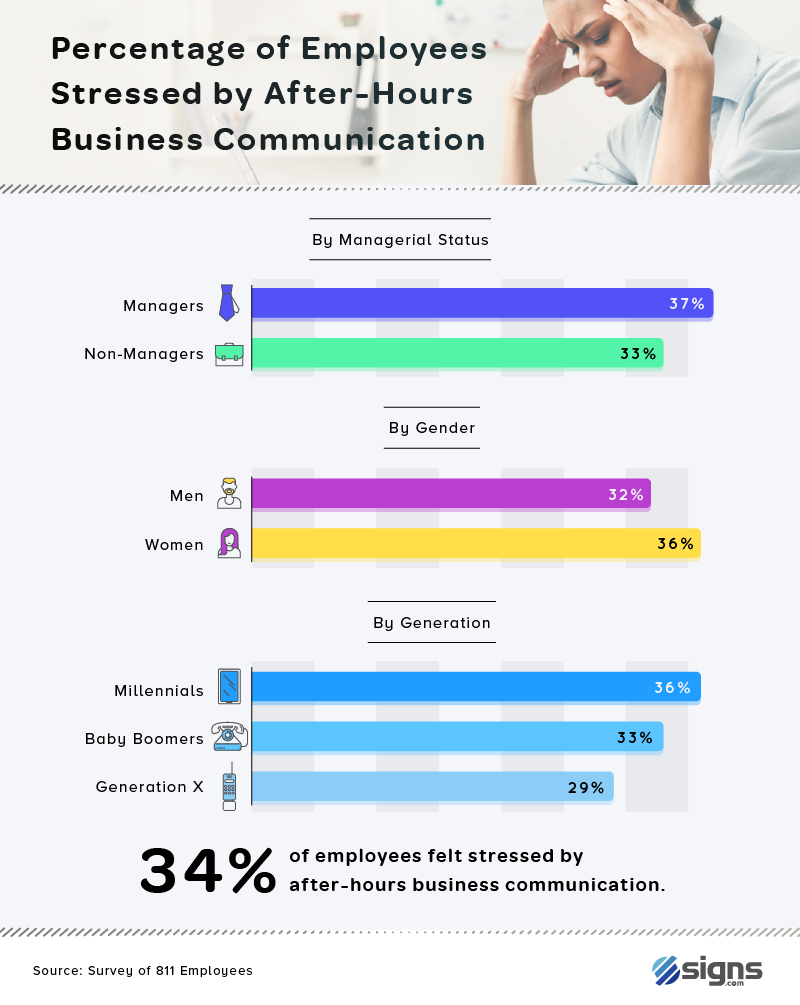 Beyond concerns about professional etiquette, some studies suggest that answering work emails after hours can cause ongoing anxiety, ultimately detracting from one's health. Indeed, roughly a third of respondents reported stress as a result of after-hours work communication. Women were particularly likely to feel anxiety related to work emails in the evening, which may relate to a phenomenon that social scientists have dubbed "the second shift." Although women are increasingly represented in the workforce, they still perform more work than men at home, such as cooking and cleaning. If late-night emails are inherently unpleasant, they may be especially stressful if you're also trying to put dinner on the table.

Managers were more likely to find after-hours messages stressful – perhaps because, as noted above, they tend to receive more of them. Additionally, stress seemed inversely correlated with age: Millennials were the most likely to feel anxiety related to late-night correspondence. Relative to their elders, young professionals may be exceptionally attached to their inboxes no matter when they receive work messages. One recent study found that white-collar workers between the ages of 25 and 34 spend more than six hours a day checking their email, and more than a third do so before getting out of bed. 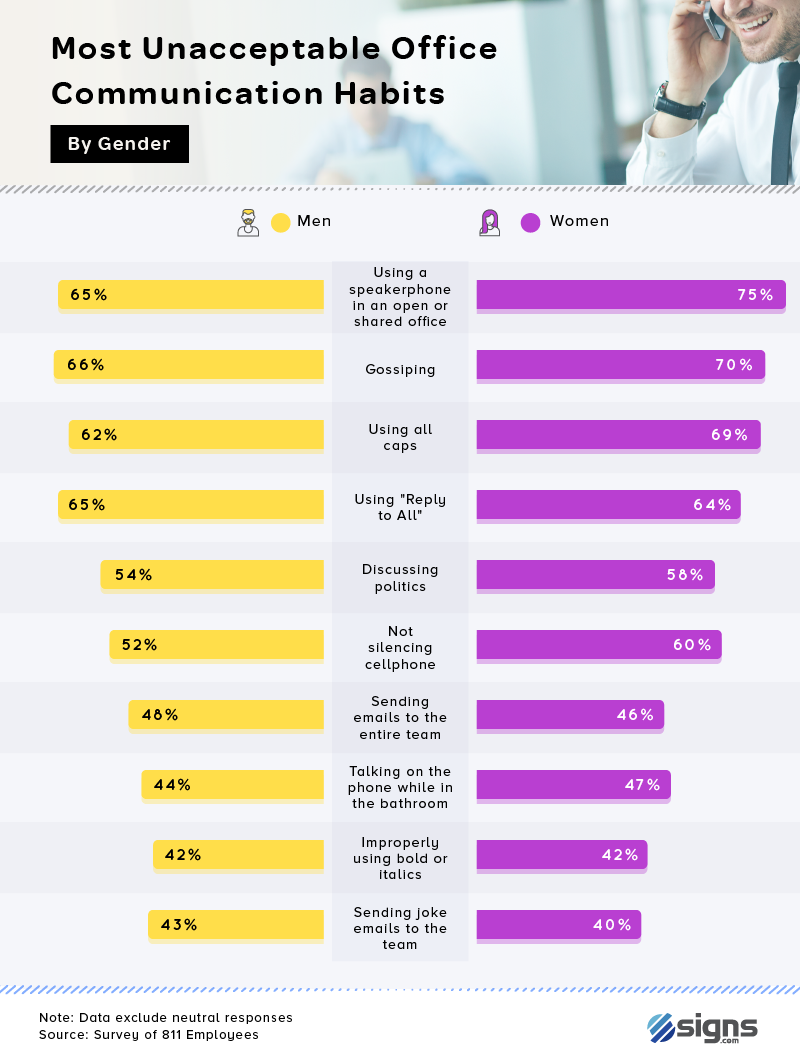 In the context of a workplace, which communication behaviors are most likely to rankle one's colleagues? Among men and women alike, using a speakerphone in an open space was widely seen as unacceptable (a pertinent concern in the era of open offices). Roughly two-thirds of male and female respondents also viewed gossip as unacceptable at work. This opinion has the backing of business experts: Besides being petty and unpleasant, the rumor mill can seriously detract from productivity and morale.

Our data also reveal interesting nuances in communication etiquette at work, especially with regard to the email medium. Whereas 62 percent of men and 69 percent of women felt using all caps was unacceptable (the digital equivalent of yelling), respondents were generally more accepting of those who used bold or italics improperly. Similarly, approximately two-thirds of respondents objected to using "Reply All" but more than half were fine with colleagues sending emails to the entire team. Moreover, only 43 percent of men and 40 percent of women were opposed to teamwide joke emails – assuming, of course, the content wasn't cruel or offensive. 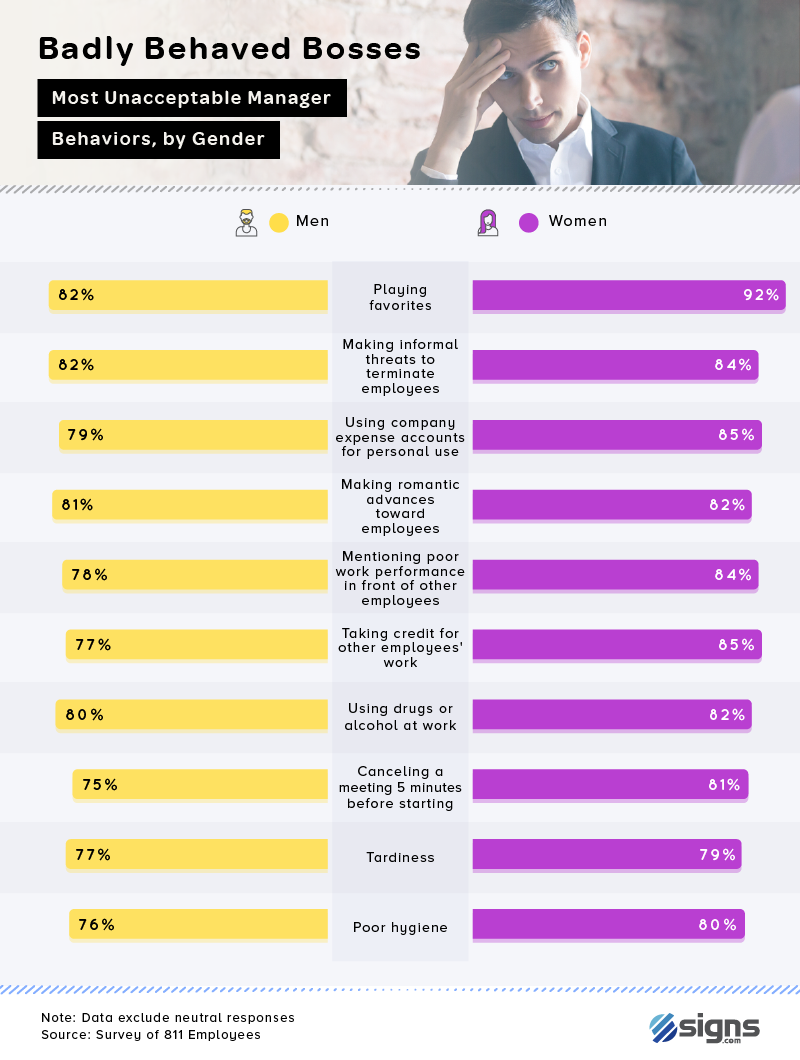 Which boss behaviors earn the ire of their workers? Playing favorites was most commonly viewed as unacceptable, particularly by women, who frequently experience latent and explicit discrimination at work. Informal firing threats were also widely despised (and, according to experts, a textbook demonstration of workplace bullying tactics). Seventy-nine percent of men and 85 percent of women also condemned managers who used the company expense account for personal purposes. 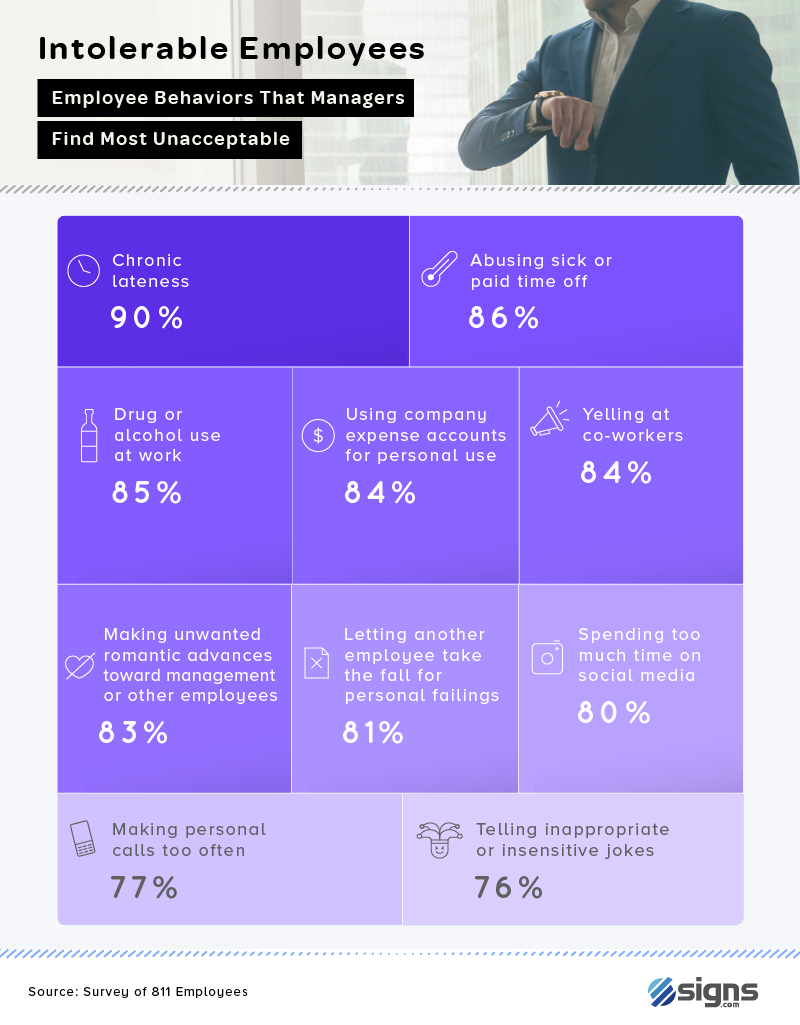 According to bosses, which behaviors are unacceptable among the people they manage? Our findings confirm the importance of simply showing up: 90 percent of managers found chronic lateness unacceptable, while 86 percent of resented workers who abused time off. Additionally, the majority of bosses could not accept clear ethical breaches, such as using drugs or alcohol at work, misusing company funds, or yelling at co-workers. That last offense could reflect real safety concerns: Experts say that outbursts of anger, such as yelling or shouting, can be precursors of workplace violence.

A smaller portion of bosses found personal phone calls or excessive time on social media unacceptable. These sentiments may reflect how little bosses can do to curb these habits. Research indicates that office workers average 90 minutes a day on social media, regardless of their companies' policies. Interestingly, only 76 percent of managers said it was unacceptable for employees to make inappropriate or insensitive jokes. Should such attempts at humor prove consistent or especially egregious, they could lead to harsh conflict among employees – or even claims of a hostile work environment. 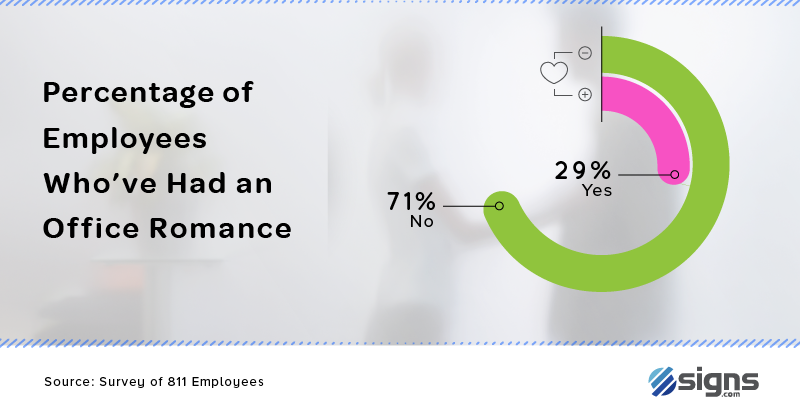 Although dating apps have transformed the way we meet potential partners, the workplace remains a vital source of romantic connections. Our findings indicate that nearly 3 in 10 professionals have engaged in an office romance. Psychologists credit the sheer amount of time colleagues spend together, noting that the emotional intensity of work situations can also accelerate bonding. Yet, as companies attempt to combat sexual harassment and misconduct, romantic connections between colleagues have become additionally fraught, with some firms demanding disclosure of all office romances. 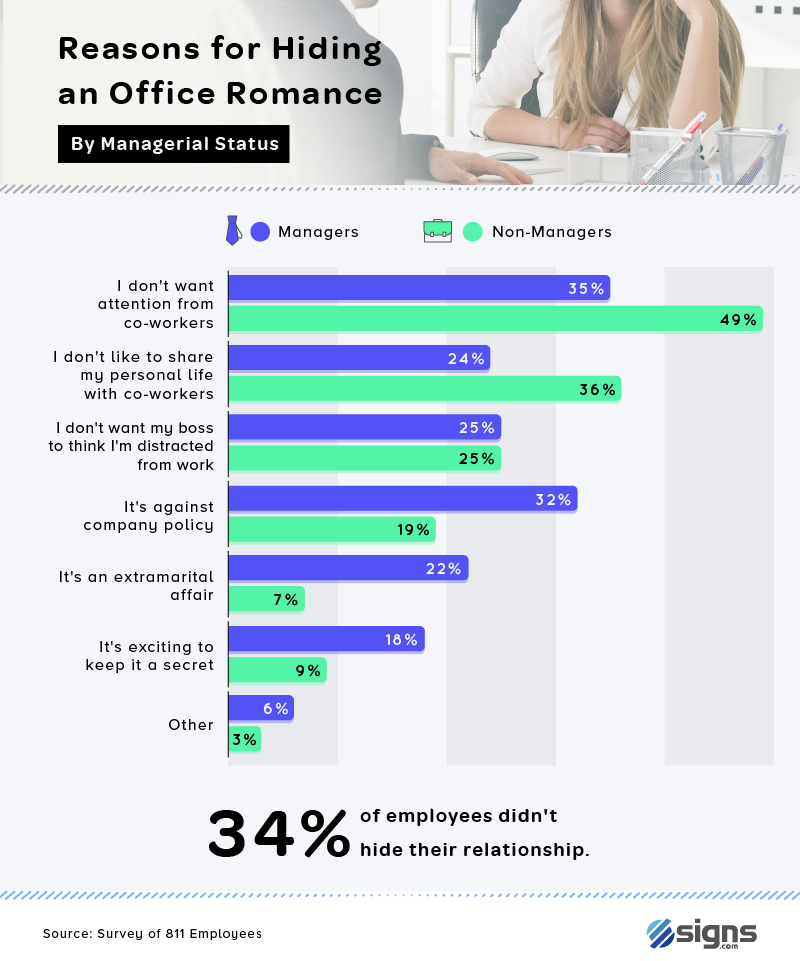 Indeed, many respondents decided to keep their office romances secret because it violated company policy. This was especially common among managers: To prevent favoritism or sexual harassment, companies sometimes adopt rules to discourage or regulate relationships between bosses and those they supervise. Managers were also much more likely to find secrecy exciting or to hide their office romance because they were married to someone else. Indeed, experts say workplace relationships are some of the most likely to evolve into cheating encounters. 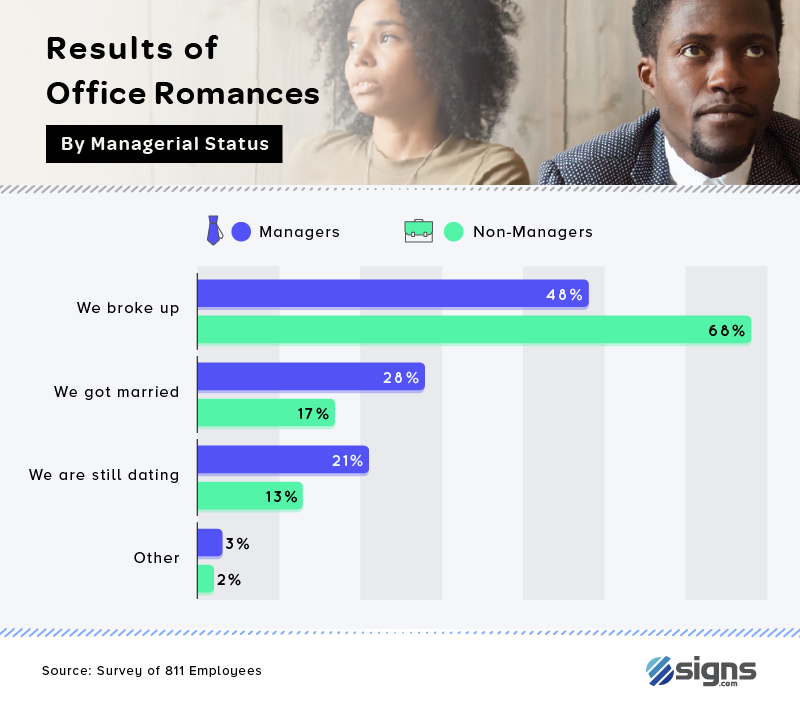 When a romantic connection between colleagues ends in an ugly breakup, things can get pretty uncomfortable around the office. Among possible outcomes resulting from office romances, breakups were, by far, the most common. Forty-eight percent of managers and 68 percent of non-managers said they eventually split with the co-worker they were dating. Perhaps because so many office flings culminate in heartbreak, many experts suggest that co-workers create a breakup contingency plan before plunging into romantic territory.

Still, positive outcomes were somewhat common as well: 28 percent of managers said their office romances developed into marriages. Perhaps this finding attests to the strength of attraction between colleagues. Because office romances entail more barriers than other relationships, the individuals involved may feel particularly strongly about each other – and passionate enough to eventually tie the knot. Additionally, 21 percent of managers and 13 percent of non-managers were still dating their co-workers, so their relationships may still develop into a future marriage.

Our findings suggest a general consensus on some subjects: Nearly all managers find chronic lateness intolerable, while the majority of workers resent bosses who play favorites. Office gossip is widely understood as unacceptable, and most folks feel compelled to answer emails after hours. But on many other matters, such as political talk or silencing cellphones, real differences of opinion emerged. Accordingly, it's incumbent on companies to establish clear policies to avoid bitterness resulting from clashing opinions. It's unlikely that all employees will agree, but setting clear standards may prevent conflict – and help everyone minimize distractions from their duties.

Whether you're communicating to employees or potential clients, your message is more likely to be absorbed when accompanied by powerful visuals. Signs.com specializes in customized signage, stickers, and presentation materials, so you never fail to make a clear impression. Could a new sign help you broadcast your company policy to all employees? Could a new banner tell potential customers what your business is all about? To discover how great signs can bring new life to your brand messaging, explore our full range of products today.

This project's data were collected through an online survey. Participants in this survey included 811 employees located in the United States. Forty percent of this cohort performed managerial duties at work. Fifty-two percent of respondents identified as men, and 48 percent identified as women. Participants' ages ranged from 18 to 74 with a median age of 34.

The data collected in our survey were self-reported and may reflect limitations associated with this mode of data collection. These limitations include the possibility of subjective memory, telescoping, and exaggeration on the part of the survey respondents.

Want to share our findings with your friends (or a colleague who could use an etiquette adjustment)? Use our images and information however you see fit, as long as you do so for noncommercial purposes. We also request that you link back to this page when you share this project to properly attribute our team. Like most employees, we appreciate a little recognition for our work.