However, memory is a tricky thing. When it comes to the collective conscious, the phenomena of the Mandela Effect can come into play. People often remember facts and images, but sometimes details are recalled in a different way than how they actually occurred or existed (see our Branded in Memory study). In this study on pop culture symbols, we asked over 1000 survey participants to identify 181 fictional symbols and logos. Most respondents easily recognized them due to frequent exposure throughout time in American pop culture, while other images fell below the bar of being ingrained in memory.

Of course, some pop culture symbols are more recognizable than others. Some inspire more fervor, from Halloween costumes and jewelry to fan tattoos. And some – like Superman’s logo – transcend generations, retaining their fame for decades.

So which television shows, movies, video games, and comic books have the most memorable imagery? And which distinct fictional sigils are a permanent part of our collective psyche?

From Comic Books to TV: Which Mediums Are Most Memorable?

Superman’s logo. Wonder Woman’s suit. The Bat-Signal. These are the symbols our survey respondents recognized most – perhaps because, over the years, they’ve crossed over every pop culture medium, from comic books to feature films, and made appearances everywhere from video games to TV. 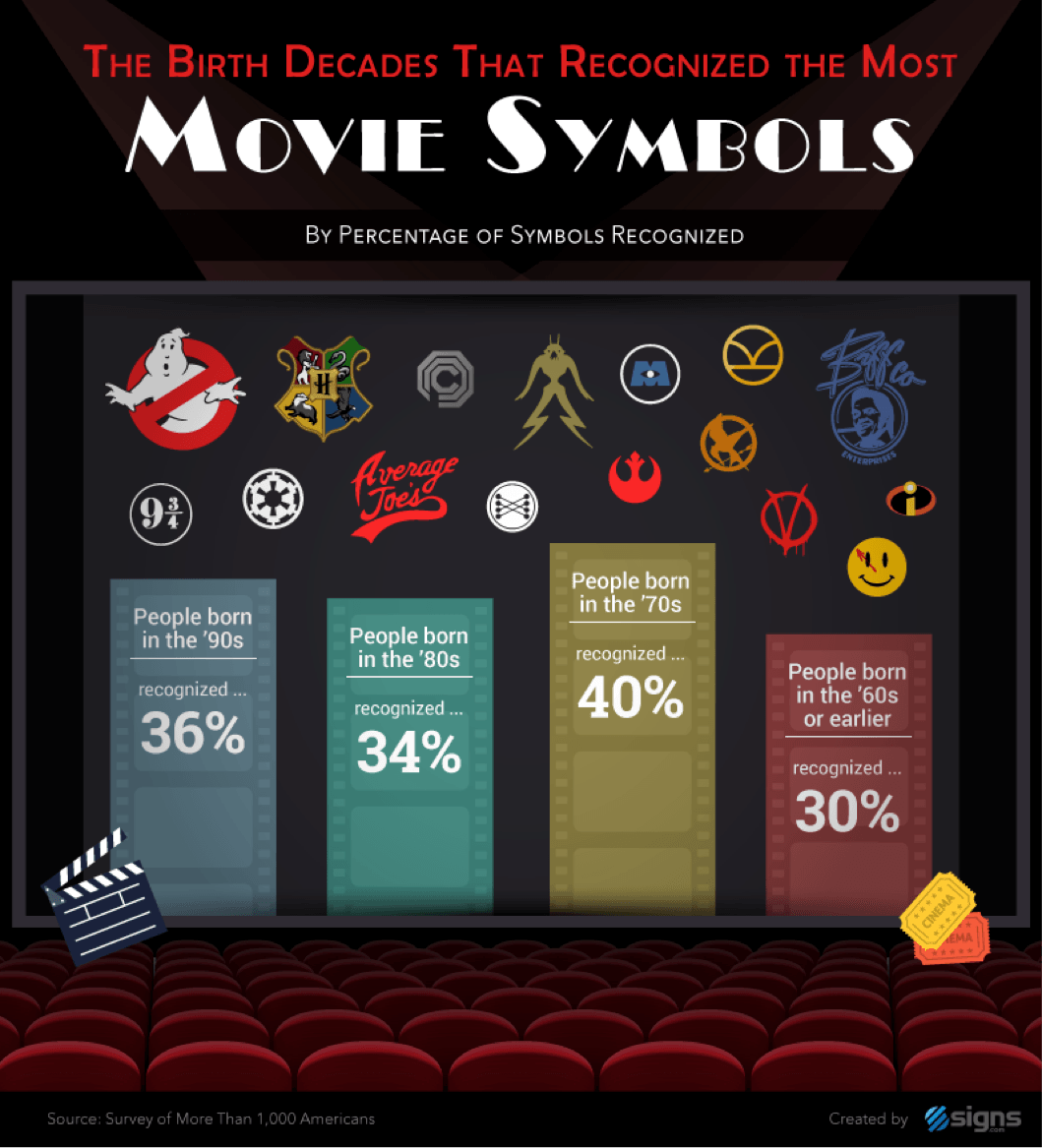 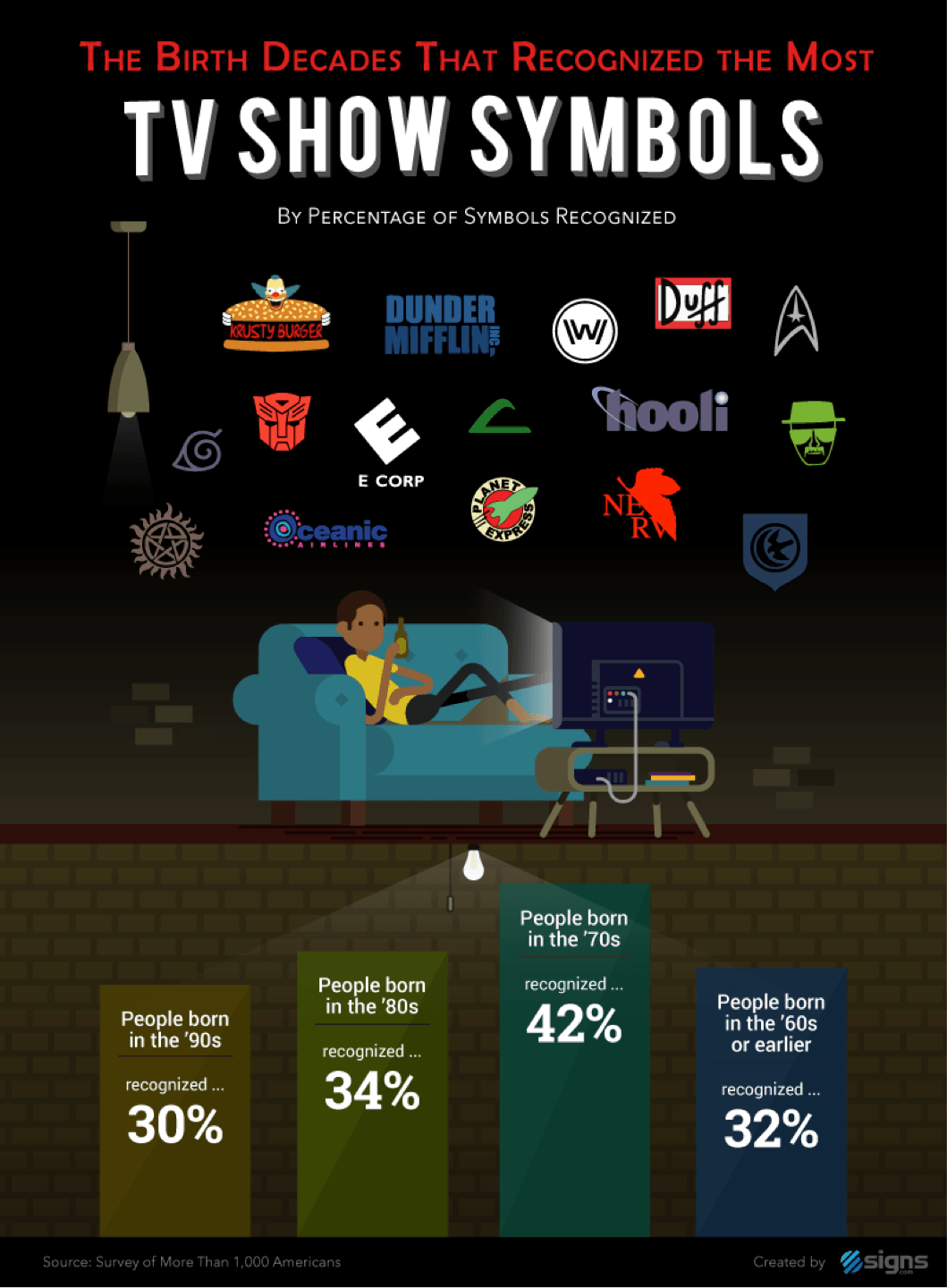 Similar to movie symbols, people born in the ‘70s had the highest percentage of recognition when it came to TV show symbols as well. In the ‘70s, viewing options were more limited than today. People from Generation X have more shared cultural experiences and memories to reminisce on and discuss. This may explain their ease of identifying these symbols. Millennials, on the other hand, grew up with more access to TV and are more accustomed to unlimited viewing options like Netflix, Hulu, Youtube, and OnDemand which promotes an individualized consumer experience, rather than a collective experience of a product. In this study, they tallied the lowest score, recognizing only 30% of the symbols they were shown which is likely due to their variance in media viewing habits.

Interestingly, the average year in which the characters and symbols made their comic debuts was in the ’60s, but it was people born in the ’90s who were most likely to recognize these visuals due to the recent resurgence of comic book fandom and reboots. Approximately 40 percent of today’s comic book and graphic novel readers are between the ages of 18 and 25 - aka those late ‘90s kids.

Further, as any movie or video game fan is fully aware, these characters have seen a rise in video games, summer blockbusters, spinoffs, and even an influx of TV series in recent years, all of which come with aggressive marketing and merchandising campaigns, carrying the legacies of these comic book characters beyond the pages of their original illustrations. 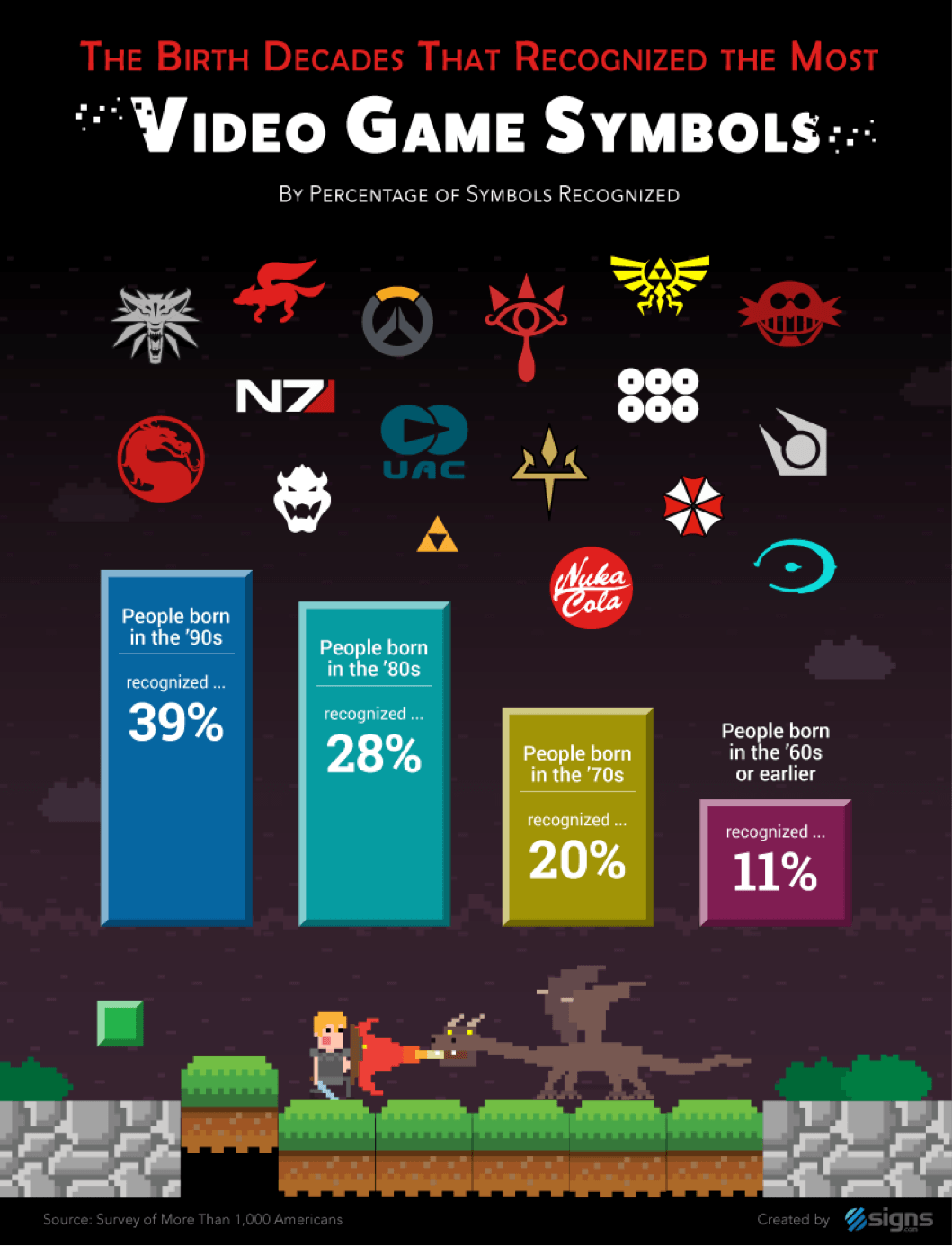 The 1990s is coined as the golden age of video games. During this decade the gaming industry expanded with several strong innovations. Graphics developed into 3-D images on screens. New genres like real-time strategies, first person shooter and survival horror became popularized. Some of the most notorious games like “Mortal Kombat”, “Super Mario World”, “Tekken”, “Legend of Zelda”, and “Need for Speed” all emerged in this time period. Video game consoles were also a must-have home entertainment system. For example, Sony’s Playstation, released in 1994, was the first system to reach the 100 million mark for global hardware units sold. From our survey, it appears that respondents born in the ’90s were very likely to recognize video game symbols, possibly because video games were such a prominent fixture in entertainment during their developmental years. They were about twice as likely to know the logos compared to those born in the ’70s; and almost four times as likely as those born in the ’60s or earlier.

Now let’s look at the symbols from each medium that were easy to pick out versus the ones that people struggled with. See how many symbols you recognize to see how you stack up against most other people! 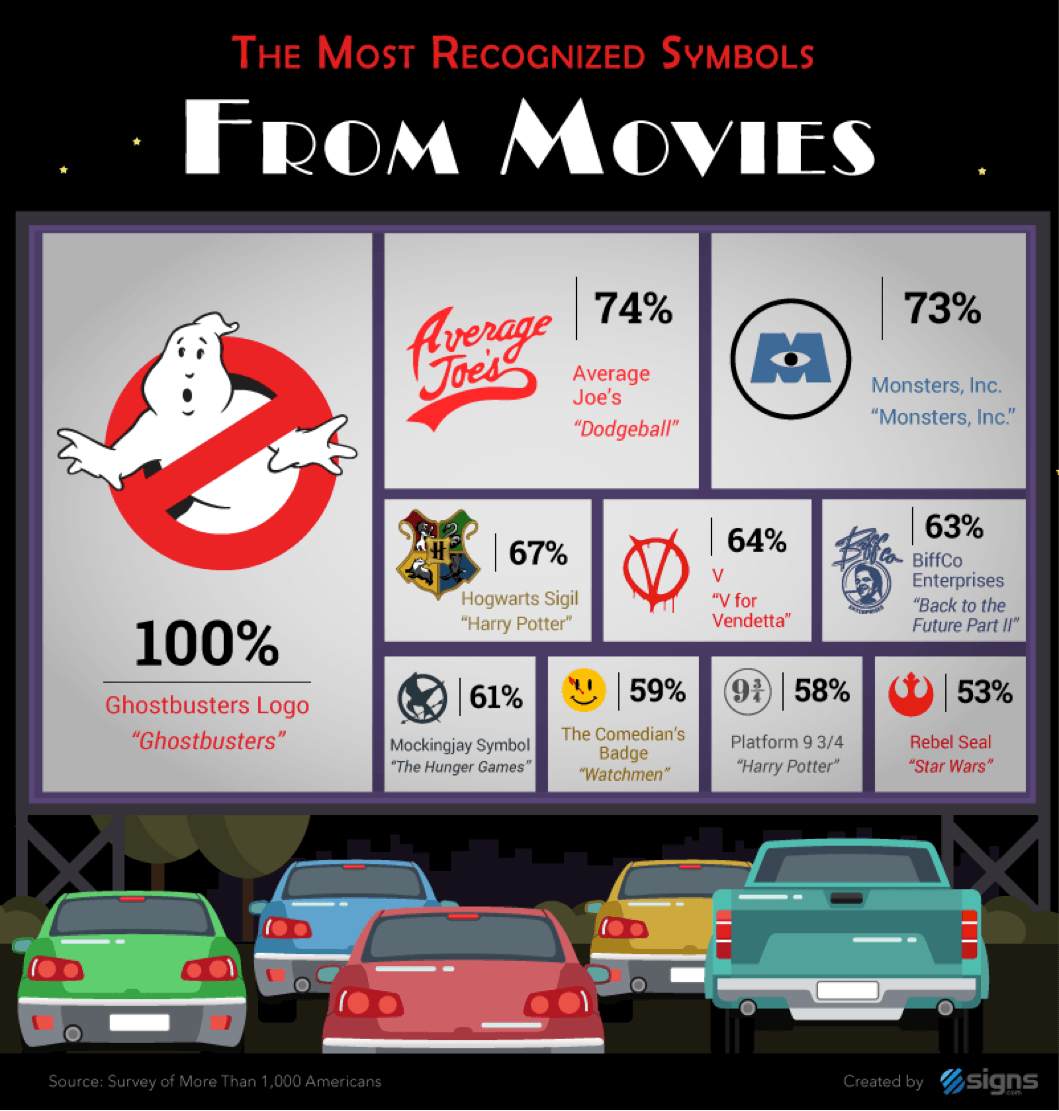 In movies, it was “Ghostbusters” that knocked it out of the park, with 100 percent recognition on its logo across all age groups – 26 percent more than any other movie symbol we tested. 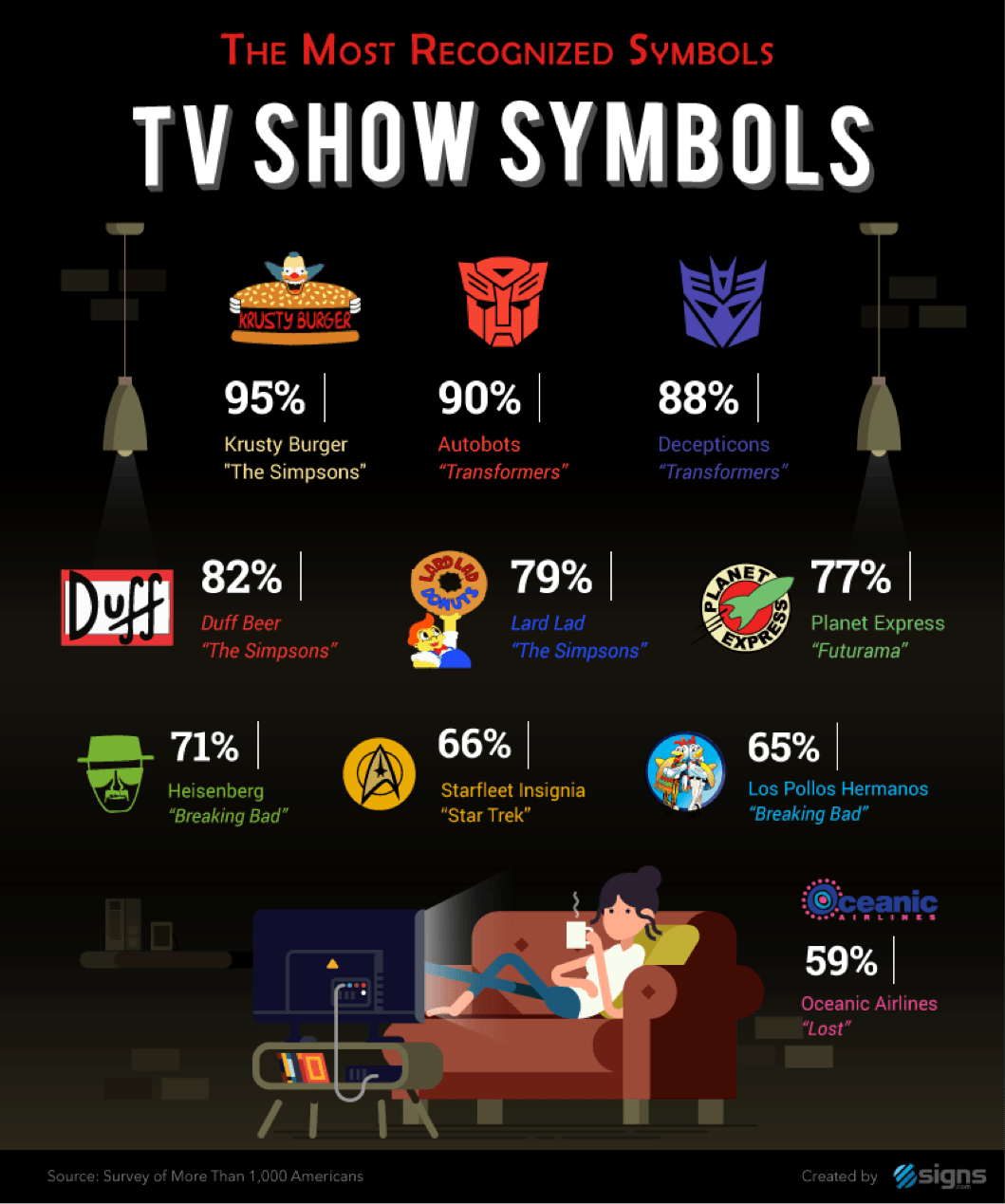 In TV, Krusty Burger from “The Simpsons” took top billing with 95 percent, followed by two “Transformers” logos at a respectable 90 percent and 88 percent, respectively. 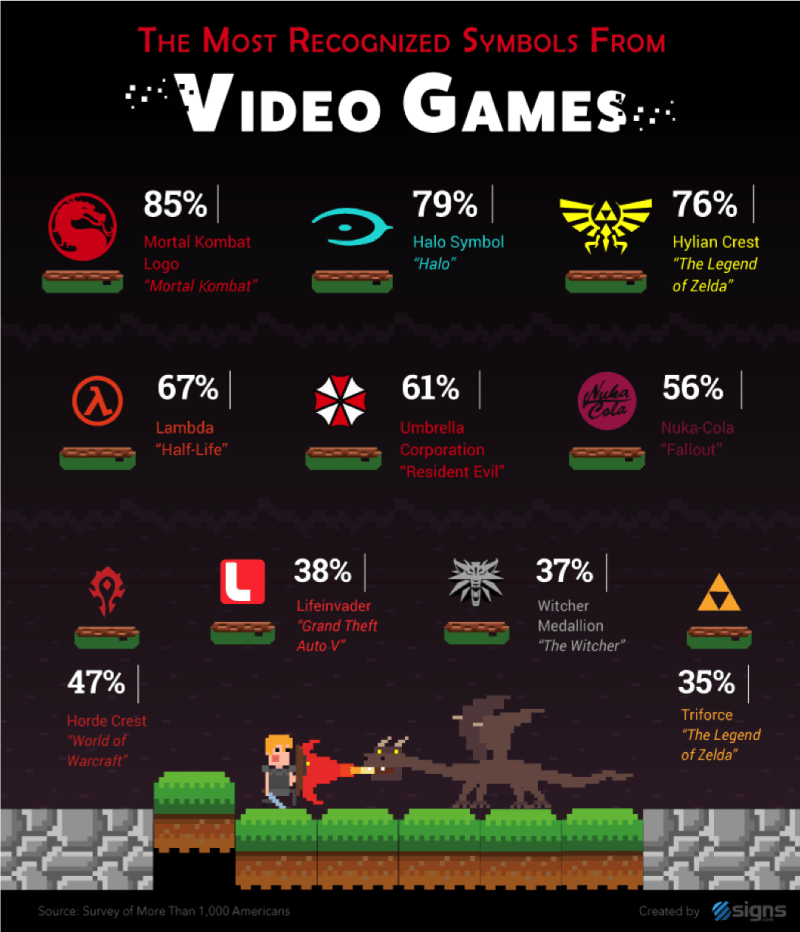 As for video games, “Mortal Kombat” led the way with 85 percent recognition. “Halo,” “The Legend of Zelda,” and “Half-Life” were our runners-up.

Symbol Recognition From Game of Thrones

With an average of 25.1 million viewers in its sixth season, there’s no denying “Game of Thrones” is one of the most popular shows of our time. But how many people recognize its plethora of sigils and symbols? 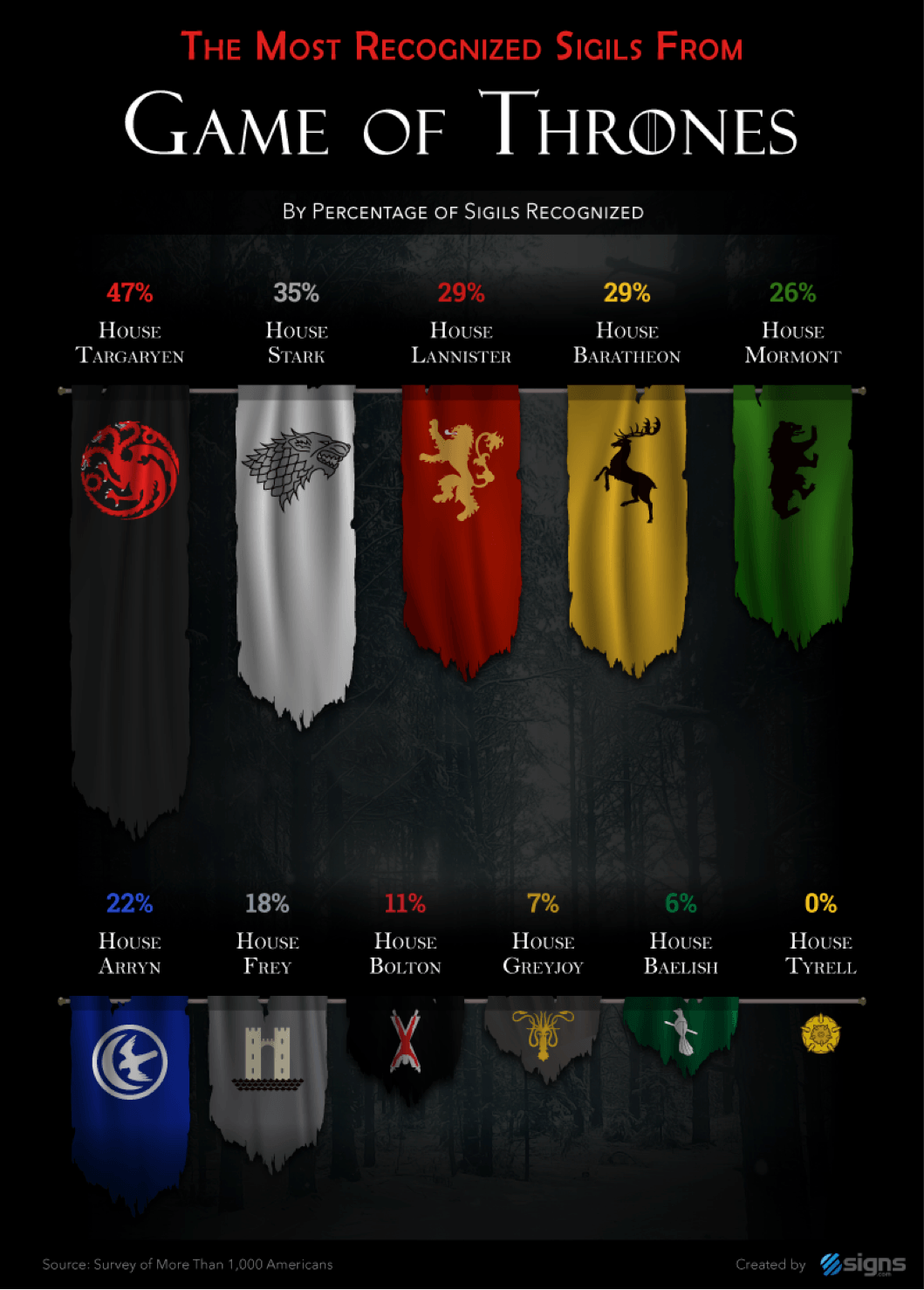 It turns out that less than 50 percent of the respondents were able to correctly recognize any individual “Game of Thrones” house sigil – the logos that represent each noble family from the series.  The most recognizable house, though, was House Targaryen, a three-headed red dragon on black, while the least recognizable house was House Tyrell, symbolized by a golden rose.

Why does one house rise above another here? According to IMDB, the characters who have received the most screen time from the HBO series are Tyrion Lannister, Jon Snow, and Daenerys Targaryen, each representing one of the three most recognized houses. Another possible explanation is that symbols such as the wolf, lion, bear, stag, and rose have all seen use as heraldic signs throughout history. The Targaryen three-headed dragon is arguably the most distinctive.

J.K. Rowling, the author behind the “Harry Potter” franchise, is one of the wealthiest writers in the world, and for good reason. Her books are best-sellers, the movies are blockbusters, and the world she created has even been turned into a theme park.

But how recognizable are the symbols from her classic story? Does the average Joe know his Hogwarts houses?

Interestingly, the answer seems to be no … 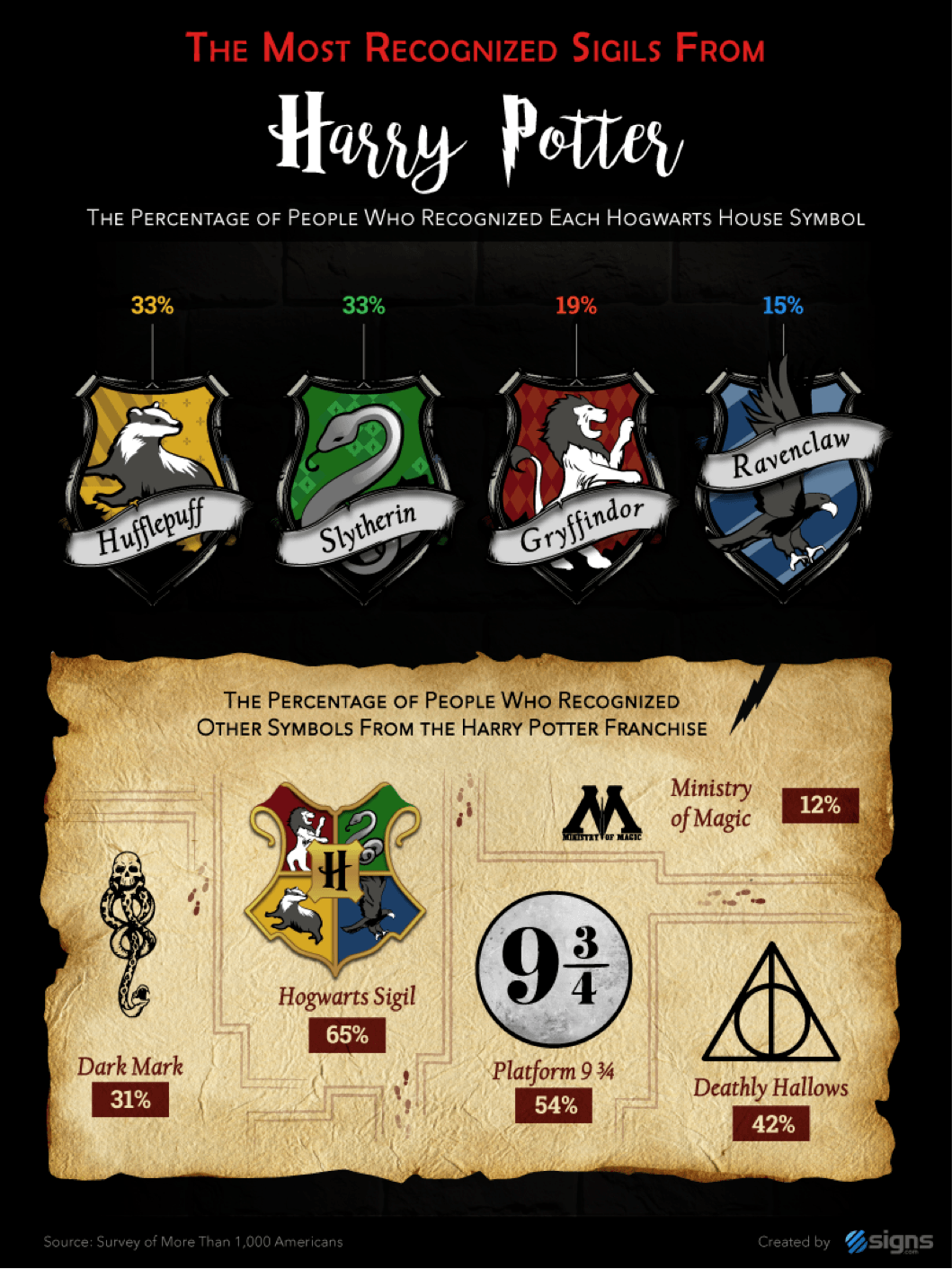 Hufflepuff and Slytherin were the most recognized houses, with just 33 percent of respondents getting them right. Harry’s own house, Gryffindor, was recognized by only 19 percent of people (though that may be because the lion symbol has been used elsewhere in literature, movies, and TV).

Despite the houses’ dismal performances, other symbols from the movies and books had much higher recognition rates. Sixty-five percent of respondents knew the Hogwarts crest, 54 percent recognized Platform Nine and Three-Quarters, and 42 percent got the Deathly Hallows symbol right. The two most recognizable symbols were introduced in both the first book and first movie adaptation and have been used often throughout the franchise’s history, which may account for their greater recognition.

Do You Know Your Superhero Logos?

Superhero logos were the most commonly recognized symbols in our study. Just how recognizable were they, though?

Superhero logos – born in comic book form mostly in the ’60s – were the most often recognized symbols in our study. Superman’s logo and the Bat-Signal both received a stunning 100 percent for recognition. Captain America, Green Lantern, and The Punisher followed closely behind with 95 percent. Despite recent runaway success at the box office, Wonder Woman came in a bit lower at 76 percent.

Overall, villains were significantly less likely to receive the same recognition rate as some of our heroes. Only 15 percent of the survey participants recalled villain symbols compared to the 56 percent awareness of heroes symbols.

Stories That Stick With Us

Interestingly, the brands with the highest symbol recognition aren’t all that new.

They’re comic book characters from the ’60s who have stuck with us generation after generation, movies from the ’80s that have been rewatched and remade over the years, and TV shows from the late ’80s that are still running today.

Based on our research, it seems good stories and great characters have a way of inspiring us, recreating themselves and sticking with us for years to come. Or perhaps those stories have simply been around longer and had more time to adhere to our collective minds. Either way, these stories and their symbols have a way of staying with us for decades.

We surveyed Americans on their recognition of 181 fictional symbols, sigils, and logos that have appeared in television shows, movies, video games, and comic books. Symbol, sigil, and logo suggestions were crowdsourced from a sample group. Thirty-four percent of images were from television shows, 24 percent were from movies, 23 percent were from video games, and 19 percent originated from comic books. Twenty-six respondents reviewed each image to determine the percentage who recognized the symbol, sigil, or logo. The average year in which symbols first debuted for each genre was – comic book characters: 1965; movies: 1993; TV shows: 2004; and video games: 2002.

Love pop culture logos and symbols? So do we. Signs.com is a team of design, marketing and tech nerds providing customers with custom signs and home decor prints. Our award-winning customer service, industry leading design tool, and fast shipping will help you start to get your business as famous and recognizable as the pop culture logos you know and love.

Want to share our research? Consider our symbol a thumbs-up. You’re welcome to share as long as it’s for noncommercial purposes and you link back to us here!