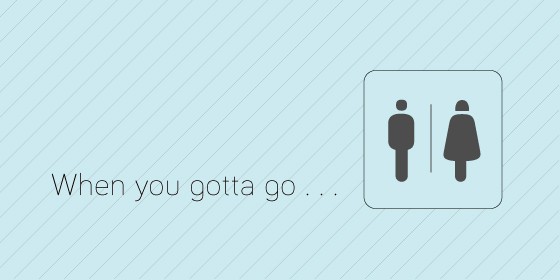 Some signs are serious. You don’t, for instance, mess with speed limit signs. You don’t make jokes about School Zone signs or Road Work signs. Because, while they’re certainly important, they’re not very funny. Bathroom signs, on the other hand, can be quite entertaining. We hate to admit it, but sometimes here at Signs.com we’re reduced to potty humor. It’s easy to do, really… because potty signs can be pretty amusing.

Here’s a bathroom in Berlin, Germany that has facilities for women, men, handicapped people and aliens. Let’s ask the obvious question: are the Germans being funny, or do they really think aliens are using the toiletten? Germans don’t have a reputation for being great comedians, so maybe they just know something we don’t. If you go in to use the Toiletten in Berlin and David Duchovny is at the sink, washing his hands and mumbling something about The Mother Ship, get out of there fast. 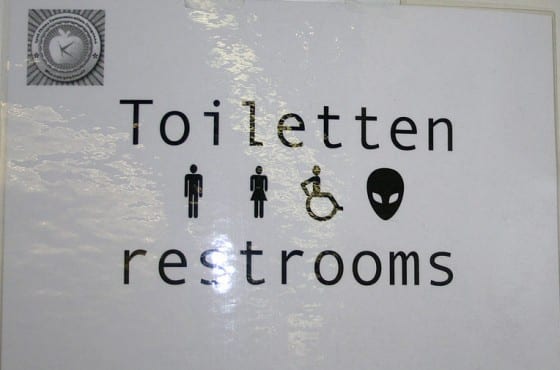 In the U.S., we’re pretty spoiled: we’re certainly not accustomed to paying for the privilege of using a public bathroom. In other countries, pay toilets are the norm. This must be particularly difficult if you have little children—they always have to pee, so you probably have to tote around a lot of spare change whenever you go out. At least in this public pay toilet you can enjoy a “magical atmosphere.” We’re not sure exactly what that means. We don’t want to know. In fact, we’ll just try to forget we ever saw this creepy looking kid sitting on the toilet, wearing a bib and bunny slippers. Who brings a kid to a park dressed like that? This poor kid needs all the magic he can get—the other little kids probably shun him on the playground. 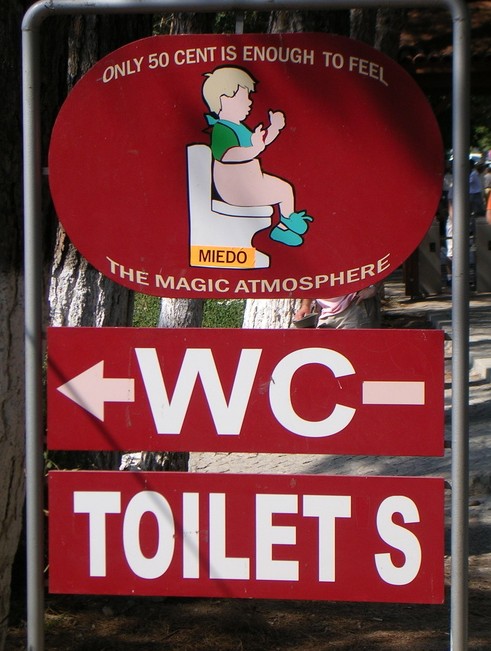 We’re not sure where this next one was found, but it’s obviously disturbing. You know when you’re in the restroom and you hear the person in the next stall having a long, dramatic conversation while going to the bathroom? Disturbing, huh? Some of you are probably even guilty of this nasty behavior. Please stop. It’s really, really yucky. But you know what’s even worse? Using a laptop on the toilet! The day Signs.com requires us to take our laptops into the bathroom to increase productivity…  is the day we quit.

Speaking of working in unsanitary conditions, the poor people at this office must really take their restroom activities seriously. To make it “official,” do you have to send a memo first? 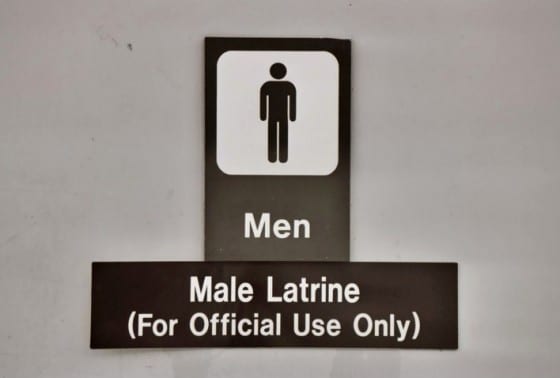 Department stores ask you to pay for merchandise before you take it into the restroom. That way you can’t fake like you have to pee, but really you’re crammed in the tiny bathroom stall, trying to stuff a whole new outfit into your purse . It’s sad that a few shoplifting felons ruin it for the rest of us. This woman has obviously paid for her purchases; she has a nice shopping bag to prove it. Hopefully at least one of the stalls still has the hook on the back of the door so she doesn’t have to sit her new stuff on the bathroom floor. 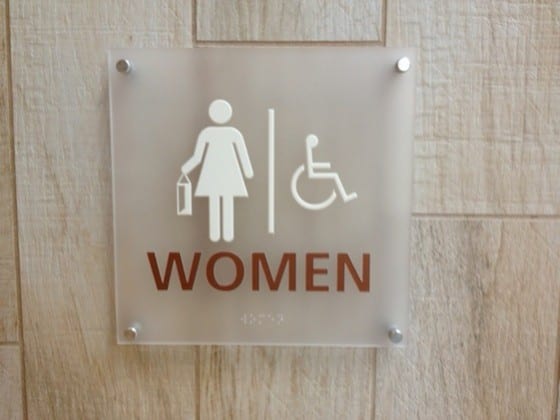 Women have often been unfairly stereotyped in two ways: men say we shop a lot and that we seem to have to pee a lot (especially while shopping). Blatant untruths! And this store is willing to blow those obviously biased stereotypes right out the window. Oh, look! A little stick man with a shopping bag. Who has to pee while on a shopping trip! Maybe he’s with some other guy who’s already dragged him through Home Depot for three hours, then through the tool department at Sears. And maybe he drank a big lemonade at the Hot Dog on a Stick. Just sayin’. 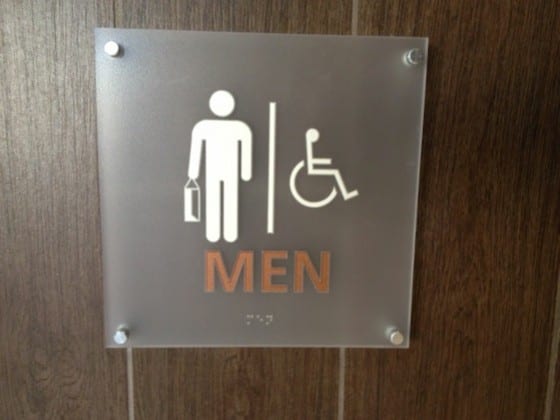 Life just isn’t always fair. At the Honolulu airport, the family restroom shows the boy with a cute Hawaiian shirt and the girl with a lei around her neck and a flower in her hair. Sadly, handicapped Hawaiians don’t get to dress up in cute floral clothing. (Also, did the boy forget his pants, or is he wearing those white Levi 501’s from the 1980’s?) 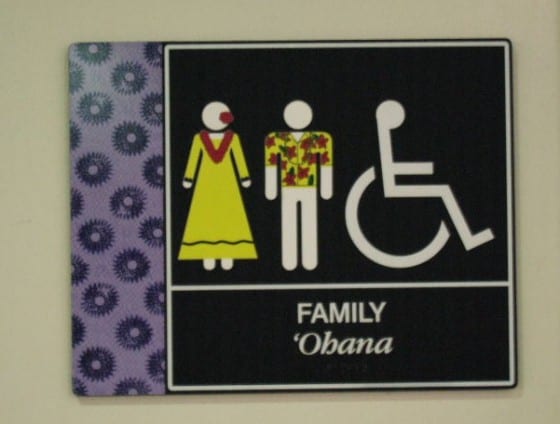 So where do suppose is the happiest place in the world to use the bathroom? Disneyland, of course! The family bathroom sign in Car Land features Lightning McQueen and Sally (and a stick person in a wheelchair). ‘Cause even awesome little animated cars have to take a break from the Disneyland fun and go potty. 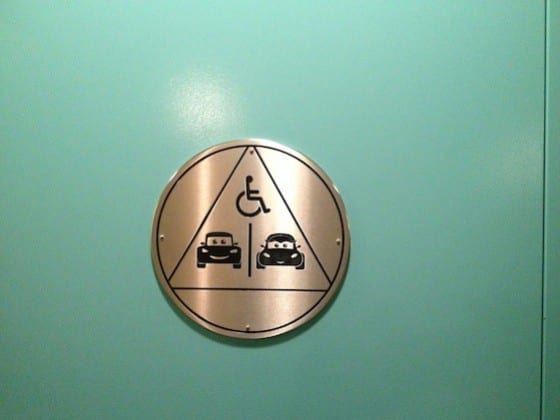 That’s all the potty humor we have for you today, but never fear… we’re always on the lookout for funny bathroom signs. Have you seen any amusing public restroom signs lately?