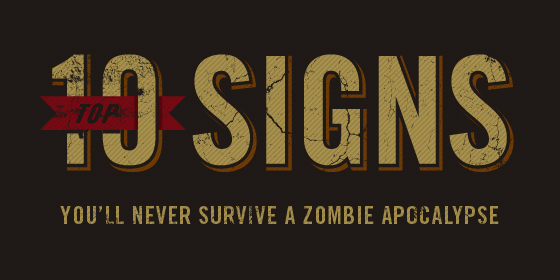 The zombie apocalypse is coming. Are you ready? You know, everyone figures that they’ll be the ones to survive the apocalypse and create a better new civilization. But obviously some of you won’t make the cut. How can you tell if you’ll live or die? Here are the top 10 signs that you’ll be zombie meat.

You have to be prepared to withstand zombie mobs. So if your garrison has lots of windows or is constructed of loose, weathered plywood that zombies can easily tear down, your days are numbered. Neeed some help? Here is a great post on fortifying your barn for the dark days ahead!

It’s good to be safely tucked away from zombies. But not if your human companions drive you crazy (or are dangerous themselves). Poor choices for company include that know-it-all neighbor down the street, the woman with the shrill voice who won’t stop screaming and your cousin the survivalist who wrote “The Cannibalism Cookbook.” Suicide by zombie is starting to look pretty good.

This is problematic, since once the power goes out they’ll promptly defrost. If the zombies don’t kill you, the salmonella in the Hot Pockets will.

Guess you should’ve had that knee replacement last year, after all. Even slow zombies can move faster than your Jazzy.

Which you don’t know how to use. Yes, we know they make it look easy on Law and Order: SVU. But you have to shoot zombies in the head to kill them, and head shots are notoriously difficult, especially with a handgun. Try a rifle with a scope or better yet: a baseball bat.

Walking Dead fans will remember Otis, who was overcome and eaten by zombies after Shane shot him in the leg on purpose in order to distract the zombie mob and get away. Poor Otis did provide a tasty distraction. Choose your friends carefully and avoid those without a conscience.

If you’re not particularly coordinated, it’s probably a bad time to take up rollerblading, rock climbing, or BASE jumping. During the apocalypse, there will most certainly be a shortage of trauma surgeons. Dying slowly from a lacerated liver sounds worse than the relatively quick death from zombies eating you.

Yeah, you and the other 450,000 residents in the city. Now you’re stuck in gridlock on I-80 and you’ve run out of gas. The zombies love this – it’s like a Chuck-A-Rama human buffet line!

Your biggest problem here is that you’ve turned into a soft, pasty guy with no muscle tone (unless you count thumb muscles, which won’t do you much good when fighting off actual hungry zombies). And when the power goes out you’ll probably have a nervous breakdown without your XBox and run screaming into the street, where the zombies will promptly eat you.

Yay! The apocalypse happened and you’re still alive . . . time to party! But zombies are drawn to noise. And the smell of barbecue  Drinking until you pass out is probably not the best course of action because a horde of zombies is sniffing out your party even as we speak, and they don’t just want to drink your beer.