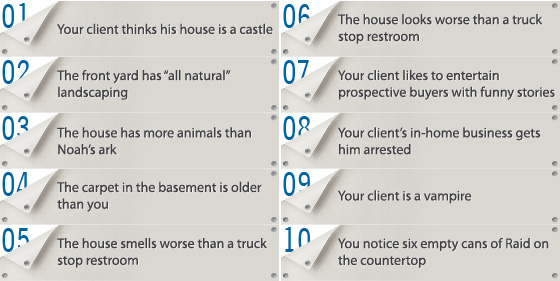 So, the Real Estate market is starting to pick up. Yay! And depending on where you live, the current inventory of houses is starting to get tight. But that doesn’t mean that every house you list will sell. Here are the top 10 signs you’re never going to sell that new listing you just got.

It’s really a 1200 square foot rambler with cheesy vinyl siding. But trying to get him to list it at market value isn’t going to fly. After all, he put the “upgraded” faucets in! That must be worth at least an extra $5,000, right?

Yeah, your creative marketing phrase isn’t going to fool anyone; those waist-high weeds in the front yard are a real turn-off to buyers.

Noah never had to sell his ark on the MLS. Most prospective buyers aren’t thrilled walking through a house that contains four cats, three dogs, a parakeet and a half dozen ferrets. And even one snake is one too many, in my opinion.

Your client proudly announces that the bright red shag carpeting in the basement was “top of the line” when he finished the basement. That would be great if it was 1975. And the fact that it’s installed halfway up the wall isn’t a groovy selling point now.

Those scented candles aren’t magic. Buyers can still smell the cat pee. Or the Bengay. Or the cigarette smoke. Now they can smell pine trees, too. Still doesn’t cancel out the nasty odors.

Oh, that’s where that smell is coming from. If the toilet hasn’t been cleaned since the Bush administration, you’ve got a problem.

Oh, he’s a funny guy all right. And it’s great how he always hangs around while buyers walk through the house. His hysterical stories about the lawsuit with the litigation-happy next door neighbor are particularly entertaining.

When your client told you his business was sales and distribution, you thought he might be involved in that popular new MLM. The “crime scene” tape across the front door is your first bad sign. The second is the hazmat team that arrives to clean up the meth lab.

Well, maybe he’s not really a vampire (though if he is, you’ll never sell the house because all the buyers will go missing). Burnt out lightbulbs, heavy curtains and closed blinds just make the inside of any house look creepy.

Nothing makes buyers run screaming into the street faster than a cockroach or two (though there’s never, ever only two cockroaches…try thousands!) Kiss that commission goodbye.

Bonus: Your signage is horrible
The house has been listed for a week and not a single prospective buyer has called. Maybe that’s because your sign has fallen over. Or maybe it’s blown into the ditch across the street. The best sign that a house is for sale is . . . a sign. So if yours isn’t doing the job, you’re not doing your job.