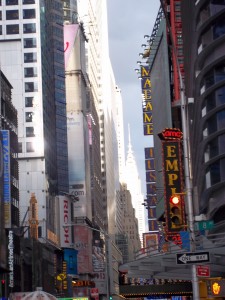 I spent last week in New York City, attending the BlogWorld convention and checking out all the sights that a city of 8 million people has to offer. Needless to say, there are a lot of signs in New York.

On any given block at street level you’ll find two pizza parlors, a drugstore, a grocer, a florist, two hotels, a cell phone store, three delis, a diner, a gelato shop, two coffee shops, a news stand and three hot dog carts. All of whom have signs, vying for your attention. It can be . . . visually noisy to say the least.

For me, the streets of New York are vastly different than those of my hometown (population 60,000). I thought I’d share some of the more interesting signs of New York City I encountered on my trip. 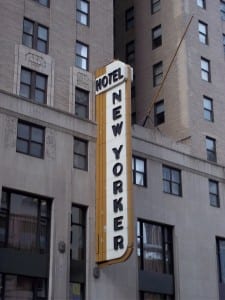 New York is a fabulous mix of old and new and its signs are no exception. The New Yorker Hotel, where I stayed during my trip, opened in 1930. The original sign still graces the side of the building near the street.

The art deco hotel was once the destination for parties, musicians and famous people. Benny Goodman and Tommy Dorsey played there. Joan Crawford and Spencer Tracy stayed there. Nikola Tesla lived in suite 3327 for the last ten years of his life and died in the hotel. With 2,500 rooms, the New Yorker was the largest hotel in the city. It even had its own power plant in the basement. The economy of the late 1970s meant some rough patches and even a brief closure, but now the newly renovated hotel has 900 rooms and is still a great icon in midtown.

The 120-foot-long Pepsi Cola sign in Queens has been a Long Island coast landmark since 1936, when it was placed in front of the Pepsi bottling plant. Newly restored, it was re-placed in front of a new development in 2009 where it faces midtown Manhattan.

Times Square is the place to look for the most modern signage in the city. At the bottom of the Conde Nast Building at 4 Times Square, advertising wraps around the NASDAQ MarketSite: 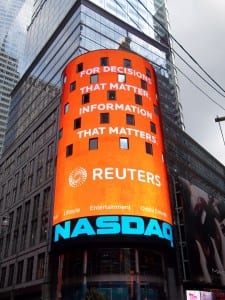 M&M World is just one of the many flagship stores found in Times Square. Their sign lit up the square, too: 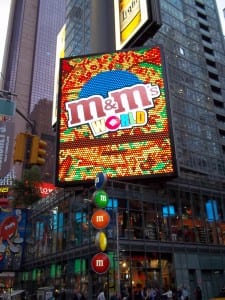 During my visit I was impressed with the cleanliness of the city. The sidewalks are not littered with trash and, despite seeing numerous mutts on leashes, I never once had to watch my step to avoid a doggy pile. Of course, a $1000 fine might deter citizens from leaving little “Lassie’s” present behind for the cops to find!

New Yorkers appear to be a healthy bunch: they walk everywhere and calorie information is required by law to be placed on menus. But the famous New York slice isn’t very healthy. This sign was found posted on the display case of a corner pizza parlor.

The best way to get from uptown to Battery Park? The subway, of course. The New York subway system is efficient and easy to use. And these great mosaic tile signs are present at every stop to let passengers know where to hop off: 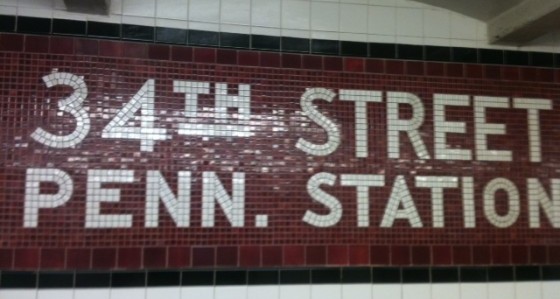 No matter where you go in New York City, there are plenty of signs to guide the way, announce a business presence and help you abide the law.