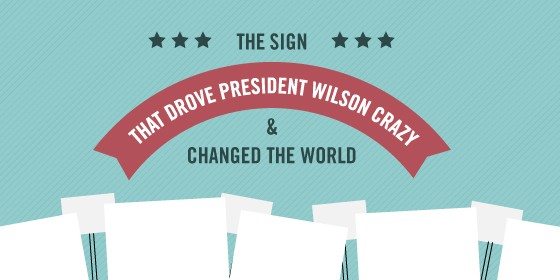 Signs are a powerful form of communication. One single sign has the ability to make a statement for an entire group of people, and do so silently. In 1917, a protest sign lent a voice to millions of women, embarrassed and outraged a U.S. President and ultimately changed the world.

A Super-Condensed History of the Women’s Suffrage Movement

From there the movement continued, amidst strong objection from men (particularly powerful men) all over the country. Saloon owners and alcohol manufacturers worried that women would vote for prohibition (turned out that religious zealots—both male and female– handled that in the 1930s, instead).

Politicians worried that women would gain power and want to start having a say in governmental matters. Husbands worried that their wives would lose their femininity and start standing up for themselves in their marriages. And, strangely, a contingent of wealthy women formed the National Organization Against Women’s Suffrage. Their take on the matter was that they were already able to get what they wanted by gently persuading their husbands with their feminine wiles and they thought if they had actual rights their husbands might not be so easily manipulated (whether they were right or not is up for debate…).

The struggle for equality went on throughout the remainder of the 1800s. Women organized protests all over the country. Highlights included the arrest of Susan B. Anthony in 1878 for voting in Rochester and the exclusion of women from the dedication of the Statue of Liberty and subsequent protest.

In 1890 the National American Woman Suffrage Association was formed and led by Susan B. Anthony. The NAWSA was the merging of two previous associations, which gave even more power and organization to the movement. Women went on to petition for signatures and gain women’s suffrage in several states. 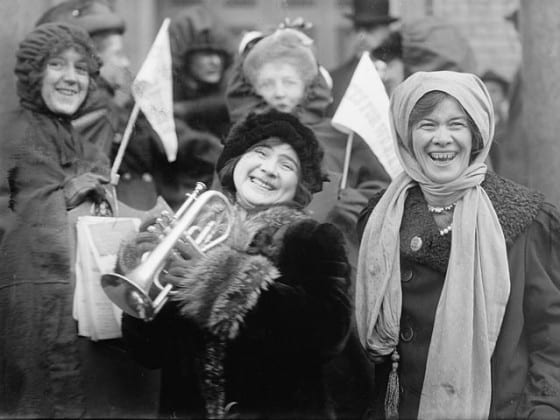 Many of the states in the Western U.S. had adopted women’s suffrage in the late 1880s and early 1900s, but in 1913, Illinois became the first state to east of the Mississippi river to allow women to vote for for the President of the United States. This huge victory energized the movement and parades and demonstrations proliferated.

Throughout his first term in office, President Woodrow Wilson was able to ignore the women’s suffrage movement. His second term would not be quite so easy.

On the eve of his inauguration in 1913, more than 5,000 women marched for rights in Washington, D.C. They were met with a vicious mob; the cavalry had to be called in to stop people from hitting, kicking and beating up the women, because local D.C. police refused to step in and help. Over 100 women were hospitalized, but no one was arrested. The press widely reported the incident and the public started to take notice.

The United States entered World War I on April 6, 1917. Wilson declared it a, “War for Democracy,” which enraged the women who had been fighting for equal rights for nearly a century—they figured if the U.S. was going to war for democracy, it might want to start by allowing half of all its citizens to vote.

Women began picketing silently outside the White House as “Sentinels of Liberty” right after Wilson’s inauguration, and stayed there for months. President Wilson tried to continue ignoring the issue. Typically, when he entered or left the White House, he would tip his hat at the protesters, but he had no desire to hear anything they had to say. Until one fateful morning in June.

On June 20, 1917, visiting Russian delegates arrived at the White House to find the Sentinels of Liberty waiting at the gates. As the delegates pulled up, the women unfurled a banner comparing President Wilson to the German Kaiser. The banner said, “We women of America tell you that America is not a democracy, twenty million women are denied the right to vote. President Wilson is the chief opponent of their national enfranchisement.”

Wilson was beside himself with rage and embarrassment. The press had a field day with photos of that sign and others comparing Wilson to the reviled German leader. The sign proved to be a tipping point.

Hundreds of female protesters were arrested between June and November. Many of the women were mistreated and abused in prison, which was again reported widely in the press. The public was getting a little more squeamish—even men who had previously rolled their eyes at the women’s suffrage movement didn’t relish the idea of women getting beat up. Many of the jailed women staged hunger strikes and had to be force-fed—another fact reported in almost every newspaper in the country.

In New York City, over 30,000 women paraded down Fifth Avenue, carrying the signatures of 1 million women requesting the right to vote. The parade clogged up the street for over 4 hours.

A President with a Problem

President Wilson, who had been steadfastly ignoring the women’s suffrage movement until June 20th, found himself in a bad situation. He was being compared to the German Kaiser. Hundreds of women had been publicly attacked and beaten, and more were staging hunger strikes in prison. Women were marching in huge parades. Wilson was looking like a great big bully.

In a not-so-surprising change of heart, Wilson announced in 1918 that he would support women’s suffrage. The jailed protesters were released. A year later, on June 14, 1919 the Nineteenth amendment was passed, which prohibits any U.S. citizen to be denied the right to vote based on sex. It was fully ratified on August 18, 1920.

The women’s suffrage movement spanned almost a century. The women who founded the movement died long before the cause was won. Millions of women picketed, marched and organized. And one sign, unfurled at just the right moment in time, helped change history.