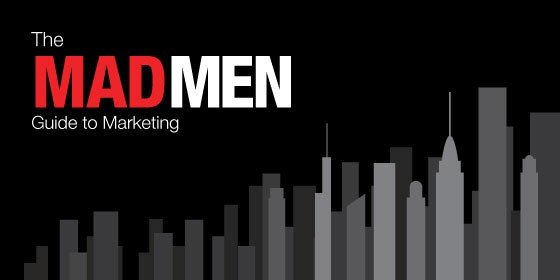 Last night AMC aired the season six premiere of Mad Men. While we’re not about to let any spoilers slip, we can tell you that a few things haven’t changed much since season five: Don Draper is still pretty hot, and he’s still up to the same shenanigans. There’s family drama, personal drama and office drama. And we always learn a lot about marketing from the Mad Men (and women) of Sterling Cooper Draper. We thought we’d share some of the wisdom they’ve passed on over the last five years.

We know that Don Draper isn’t perfect. He can’t seem to stay faithful to any woman for very long and he was a terrible brother. When poor Lane Pryce asked for forgiveness, the holier-than-thou Draper refused, and that didn’t end well either. But usually we can count on Don to at least be charming, witty and winsome with the clients.

Don usually knows his customers inside and out. He knows who they are, what they value and what they want. But when Jantzen swimwear showed up for a new campaign in season 4, Don not only lost the clients by not understanding who they were, he lost his cool, too.

Jantzen already had a history of offering very modest swimwear; suits that were less for sunbathing on the beach and more for actually swimming. Don thought that perhaps the company needed to get current with the times (the late 1960s) and be a bit more adventurous with their advertising.

He created an ad with Jantzen’s new two-piece suit, showing a woman wearing the swim bottoms with a advertising banner across her top that said, “So Well Built We Can’t Show You the Second Floor.” Provocative, to say the least. And the clients? Horrified.

Jantzen: We don’t want a wink. I think I explained: our product is for modest people.

Don: You’ll get them into the store, isn’t that the point?

Jantzen: It’s not wholesome… did I tell you we’re a family company?

Don: You need to decide what kind of company you want to be. Comfortable and dead. Or risky and possibly rich.

Jantzen: All I know is we don’t want that.

Don becomes infuriated that his clients aren’t willing to embrace the sexier, looser morals of the 60’s and kicks them out of the office. He should know better. You can’t change who your customers are or what they want and you shouldn’t try.

When planning your marketing campaign, stick to your demographic. If your customers are very conservative, don’t try to be provocative and sexy, or you’ll leave them confused and upset. It didn’t work for Don, and it won’t work for you.

When You Don’t Know What Your Customer Wants, Ask Her.

Early in the Mad Men series, Freddy and Sal are grappling with a new client: Belle Jolie lipstick. Obviously, neither man has ever used lipstick and the whole concept of makeup is foreign to them. They sit in their office, mocking the funny names for the different colors and wondering why anyone would ever be dumb enough to buy the brand. They quickly realize that they’re in over their heads and that they need the opinions of the actual customers: women. They call the secretarial pool together for a focus group.

Freddy, Sal and most of the other Mad men gather behind the one-way mirror and proceed to act like chauvinist pigs, leering and making fun of the women. They’re not learning much, but Peggy is.

She spends the session watching the other women try on lipsticks. Each woman applies her lipstick, then poses in the mirror, pursing and pouting her lips. Then, she presses a tissue onto her lips, leaving a lipstick “kiss” and tosses the tissue into a wastebasket.

After they leave, Freddy Rumson speaks to Peggy:

Freddy: Well now we have to count the shades they tried. Can you bring me those tissues, dear?

Peggy: Here’s your basket of kisses.

Freddy: That’s cute. who told you that?

Peggy: What do you mean? I just thought of it. Isn’t that what it is?

Freddy: It is, sweetheart. Which color did you like?

Peggy: I didn’t get the one I liked. Someone took my color.

Freddy: Why didn’t you choose another one?

Freddy: As opposed to the other girls?

Peggy: I don’t know. I don’t think anyone wants to be one of a hundred colors in a box.

Freddy is impressed. Both by Peggy’s natural ability to come up with great copy (her “basket of kisses line” earns her the eventual promotion to copywriter) and her honest opinion: women want to be seen as individuals. A woman’s signature lip color makes her who she is. The agency goes forward with that idea and the client loves it.

When you’re not sure what your customer wants, just ask. The answer might be something you weren’t expecting, but it’s alway the right answer, because the customer is the one who’s buying.

In the first season of Mad Men, the technology of the 1960’s is bringing change to the industry. Cooper Sterling is falling behind its competition: the other agencies all have television departments that are focused on product placement and television ads.

Harry Crane convinces the agency that they need to do the same. They reluctantly allow him to make up his own job as the sole member of the the Television Department. Everyone in the office thinks that Harry has somehow wrangled a job that entails nothing but watching TV, and they all tease him relentlessly.

But Harry is onto something big. And when the agency starts impressing big clients like Maytag, the partners begin to see the value of integrating new technology with their current product: print ads. In fact, in last night’s premiere we see Peggy coming up with a brilliant idea for a Super Bowl ad.

Don’t be afraid to include new technology in your marketing campaign. Social media might not be your forte, but it’s changing customer/company communication. If you aren’t engaging with customers through Facebook, Twitter, Google+, Pinterest and others, you’re missing out on a huge audience.

2012 saw a big trend in customer shopping via tablets and smart phones. Is your website optimized to handle those devices? If it isn’t, your site looks really messed up on the smaller screens, and you’re missing out… on a huge audience.

It was true in the 60’s, and it’s still true today: customers want to hear a story. They don’t want to be bombarded with “Buy Now!” commands and tacky attempts to convince them that your product is the best. Sometimes as marketers, we forget to go back to the basics. The Mad men needed Megan to remind them about the power of a story.

In season 5, the agency is trying to work with Heinz on its baked beans campaign. Peggy’s “Bean Ballet” turns out to just be weird and the client isn’t impressed, so the guys go back to the drawing board to come up with some way to convince people to buy beans. In the meantime, Megan comes up with a different idea. She goes into Don’s office to tell him about it.

Don: Kids want beans, and they have forever.

Megan: Oh, I had something like, “Heinz beans… some things never change.”

Don and Megan take the Heinzes out to dinner. They tell Raymond and his wife the bean story:

Don: Last night we had three generations under one roof: Megan, her mother and my daughter Sally. You should have seen it: Megan bringing the pot it, spooning the beans onto the plate. Her mother was smiling.

Mrs. Heinz: What a darling scene.

Don: I think it would be a series of one shot little movies: One mother, in a prehistoric cave, serving beans to a shaggy little boy by a fire. Then a Greek woman in a toga with a little shepherd boy. Then Marie Antoinette to a little prince. Calamity Jane to a little pioneer boy. All the way through the gay 90’s to today… in a kitchen like yours.

Megan: Tell him the rest.

Don: It goes past present day to the future to a little lunar kitchen with the earth off in the window: futuristic clothing, interesting bowls. The kid has just taken off his space helmet as he takes a warm bite.

Megan: When Don told me (the idea), I thought, ‘We’re all so busy and we rush around and it will probably always be like that. But a mother, a child and dinner. That will never change.”

Ignoring the fact that Megan just hands Don her idea and has no problem with him taking all the credit (it is the 60’s after all… women are still grappling with the idea of equality in the workplace), you can see the power of a story. Heinz needs a way to convince people to buy more beans. He hates the dancing ballet bean idea (and who wouldn’t?) But he loves a story… the story of how his product has always been part of a cozy mother and child narrative… and always will be.

Don’t just tell your customers that your product is great. Don’t try to do weird things in the hopes that wild creativity will excite people. Instead, come up with a narrative that portrays your product in a way that people will want to be a part of.

And the Mad Men Move On

We’re excited to see what season 6 brings this spring. Undoubtedly, the Mad Men (and women) will continue to have their personal failings and dramas. But they’ll also continue to show us what good marketing can do.