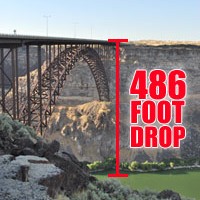 The I.B. Perrine Bridge in Twin Falls, Idaho is one of the only man-made structures in the United States where BASE jumpers can jump without a permit. So of course, there’s a fair amount of BASE jumping going on. I recently passed through Twin Falls and had the opportunity to watch several daring souls jump off the bridge into a 486 foot abyss. It occurred to me that, while not immediately apparent, BASE jumpers have skills that would come in really handy in the business world.

A BASE Jumper Has Guts

For those who aren’t aware, BASE jumpers are people who strap on a parachute and then, instead of climbing into an airplane to skydive,  find something else high to jump off of. BASE is an acronym that covers each of the four types of things these guys (and girls) jump off: Buildings, Antennas, Spans (that’s bridges to you and me) and Earth (in this case, cliffs).

BASE jumping is an extreme sport. Meaning that non-risk takers don’t tend to do it. It takes a lot of guts to jump off of something and plummet to the ground, hoping that you have time to open your chute and that you don’t get slammed into a cliff or tangled up or otherwise make mistakes that will kill you.

OK, opening a business isn’t quite that risky. But I could argue that compared to just going to a nice, stable office job everyday, it’s akin to jumping off a structure and hoping you don’t die.

A BASE Jumper Prepares Carefully Before Jumping

During my time at the Perrine Bridge, I watched four guys getting ready to make jumps. They were assembled on a grassy area near the bridge and were packing their chutes, checking and double-checking their lines and rigging and all those little connecting bits that surely have names only BASE jumpers know.

It goes without saying that preparing carefully before jumping from a tall structure is a good idea. And while BASE jumpers certainly seem like risk-takers and adrenalin junkies, they’re deadly serious about preparation. The four guys I watched were smiling and relaxed while packing for their jumps, but they weren’t goofing off.

Preparation is obviously a good idea before starting a business. If you don’t know what you need to start and run your business and have no idea how to put those things into place, your business will crash. You probably won’t die. But at your next family reunion you will have to explain to Uncle Frank (whose sons are both surgeons) how you failed epically. And that might be almost as bad as jumping 400 feet into an abyss without a parachute.

A BASE Jumper is a Team Player

Yeah, I hate the phrase “Team Players” as much as you do. But you have to admit that working closely with a team of people is beneficial to a business. BASE jumpers rely on team work to keep them safe and to have extra fun.

While preparing for jumps, smart BASE jumpers have checklists and checklist buddies. As they pack, their buddy reads off the checklist to make sure that they’ve tightened every connecting bit and threaded every line through every grommet (or however they do it). Before they jump, the checklist buddy reads off another list. For instance, after packing, many BASE jumpers secure their chutes with a tie or rubber band to keep it from getting tangled while they climb up to their jumping-off spot. If they forget to undo the tie… the chute doesn’t open. Imagine how much adrenalin you have as you ascend to the top of a very, very high structure in preparation of jumping off. It’s all too easy to forget every last detail when your brain is flooded with endorphins. Some people have actually forgotten to undo their tie or rubber band, with fatal results. Which is why a checklist buddy at the jump site is a good idea.

Keep your checklist buddies (employees and business partners) close and rely on them to help you as you make big business decisions. While you’re freaking out about taking a big risk, they might be more clear-headed and calm and can keep you from making dumb mistakes.

A BASE Jumper Gets an Education Before Jumping

Many people who want to get into BASE jumping start with a class known as a FJC (First Jump Course). These are taught by experience BASE jumpers and include several days (if not more) of instruction on equipment preparation, types of jumps and techniques.
As a potential (or new) business owner, you should be getting an education, too. Check out the SBA.gov site for lots of info on starting a new business. Look for more information from your state and city.

A BASE Jumper Networks Within His/Her Community

BASE jumpers have a world-wide community and seem to be a pretty tight bunch. Basejumper.com has lots of information and forum boards for jumpers from all over the world to share their stories and tips. Getting advice from people who have been in the sport for a long time (and are still alive to tell their stories) is helpful for all BASE jumpers, but especially the new ones.

Business owners have lots of opportunities to network, too. Find a group that can help you learn about how to run your business (your local chamber of commerce is a good place to start). And find a mentor. You’ll learn a lot.

A BASE Jumper Knows Proper Etiquette

BASE jumpers realize how their actions affect others and behave accordingly. In the world of BASE jumping, it’s common courtesy to notify the police dispatch prior to jumping. Imagine that you’re driving across a bridge and you see some guy climb over the guard rail. If you don’t notice his parachute, you probably think he’s trying to commit suicide. So you call 911. And the police, fire department and paramedics show up, only to find a guy at the bottom of the ravine, stuffing his parachute back into his bag.

You probably won’t be jumping from the roof of your shop with a parachute (and hopefully not without one, either!). But recognize that your business practices affect others in your community and act accordingly.