Ahoy, Matey! Today is International Talk Like a Pirate Day. And it’s the tenth anniversary of the holiday, so extra celebrating is in order. Unless you’re involved in filming Pirates of the Caribbean Part Six and hanging out on the set every day, you probably don’t often run into people sporting eye patches and growling “arrrr.” So it could be a bit disconcerting. Here are the answer to common questions surrounding this popular holiday.

How did this holiday get started?

The idea for International Talk Like a Pirate Day was born in 1995 during a racquetball game between friends John Baur and Mark Summers. For some reason unknown to even them, they began yelling pirate slang out as they hit the ball. And it seemed kind of fun. They figured it would be super cool to have an annual holiday where everyone talked like pirates. So they designated September 19th as the day, and then proceeded to spend the next seven years celebrating the holiday by themselves, since no one (other than one friend named Brian) knew about it.

But then they wrote columnist Dave Barry an email about it. And he wrote a column about it. And John and Mark became famous. Now people all over the world talk like pirates every September 19th. Which shows you the power of columnists, if nothing else.

Why is this an important holiday?

Well, compared to holidays such as Groundhog Day or National Zucchini Day, it really isn’t. This holiday isn’t going to change the world, predict the end of winter or even generate yummy new zucchini soup recipes. It’s just fun. Really.

Mark and John point out on their website that real pirates are bad people. And shouldn’t be emulated. After all, it’s not BE a pirate day. It’s TALK like a pirate day. Don’t go out brandishing swords and capturing ships and taking hostages and stuff today.

The guys have this to say about the holiday they created:

“So what is it exactly that we’re celebrating here, if not pirates? What, you’re wondering, is the point? We’re going to be painfully honest here, perhaps fatally so. The point is, there is no point. And that’s what’s fun about Talk Like a Pirate Day specifically, and talking like a pirate in general. We’re talking about the mere image of swaggering pirateness. And while this is a guys’ guide, the comely wench will have fun talking like a pirate, too. It’s powerful, yet harmless. Perhaps, dare we suggest it, the ultimate aphrodisiac. Try it!”

If you feel like being a bi or tri-lingual pirate, you can learn German and French phrases on the website. Turn any phrase into a pirate phrase with the English-to-Pirate Translator

Do I have to celebrate Talk Like a Pirate Day just once a year?

Well, officially the holiday only happens on September 19th. But you could probably try extending it by several weeks and see what happens. You might lose your job. And most of your friends might start avoiding your calls. And your wife might pack up the kids and go to her mother’s while you get over this latest annoying phase. But give it a try and let us know how it goes!

You mention Pirates of the Caribbean Part Six in the intro to this article. I can’t wait to see it! When does it come out?

No, there’s not really a Pirates of the Caribbean Part Six in the works. There’s only so much Johnny Depp with unwashed hair and bad grammar that people can take. Even Disney has (hopefully) had enough.

*Update: Just found out that Krispy Kreme (participating locations only) is offering a free doughnut to anyone that comes into one of their stores and talks like a pirate – better yet, they will give away a dozen to anyone dressed like a pirate. So, now you have no excuse for not celebrating today! 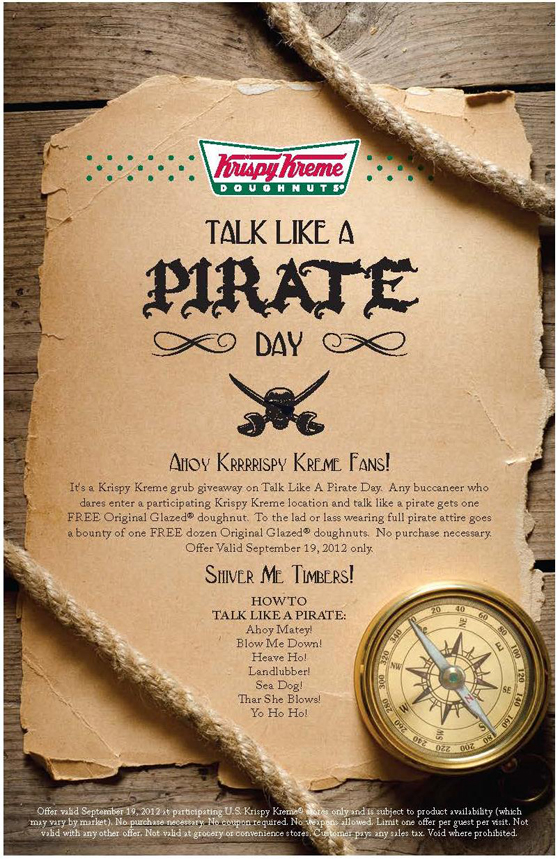