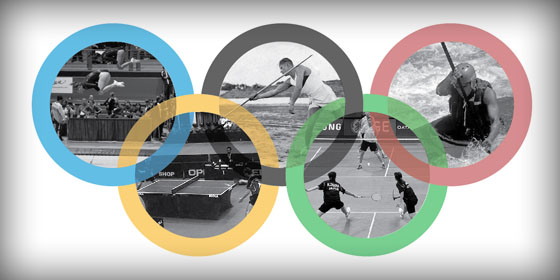 During the Olympic Games, even couch potatoes dream of athletic glory. And those athletes make it all look so easy that some of us might even start to believe that we’d have a chance at Gold. Let’s be honest . . . for 99.9% of the American population, that’s a pipe dream. But you might have some fun practicing some of these Summer Olympic Sports in your own backyard, even if your aspirations of Olympic fame are not meant to become reality.

Trampoline has been an official Olympic sport since 2000. These guys (and gals) go flying through the air, flipping and rotating at much greater heights than your backyard trampoline will allow. Which is just as well, because backyard trampolines already cause enough havoc.

In 2010, CBS reported that trampolines are responsible for 98,000 emergency visits every year. I once had an ER doctor tell me that as long as people continued to buy trampolines, he was secure in the knowledge that his kids’ college funds would easily cover tuition at any Ivy League school they chose. He doesn’t need to worry; over 1 million are sold in the U.S. annually.  If you’re an aspiring trampolinist and you don’t want to be an ER statistic, you might want to find a real gym where you can practice with a safety harness.

Even I’ve been canoeing and I’m just a sedentary writer. My idea of a nice afternoon of canoeing includes about a half hour of leisurely paddling across a lake, followed by a picnic. So I suppose I wouldn’t make a very good canoe or kayak athlete . . . both require great upper-body strength, stamina and agility.

Most of the events include competitions with either one or two racers per vessel. The men’s kayak 1000m sprint and the women’s kayak 500m sprints also include a race with four racers.

There are two kinds of races for canoe and kayak: sprint and slalom. Sprint involves racing on calm waters for a variety of distances (as few as 200m and as far as 1000m). Slalom is white-water racing, where you have to navigate your kayak or canoe around poles. Like ski slalom. Except that the surface below you is moving. Really, really fast.

If you live near a lake or river, you can practice for the Olympics with your kayak or canoe (if you don’t have one, rent one). You should probably already be adept at swimming, in case you don’t have any natural talent and you end up in the drink. Also, a floatation vest is a good idea. Even if it does make you look like a marshmallow.

Next time you have a family reunion, you can all practice for the Olympics. Badminton has been an official Olympic sport since 1992. But the competition is a bit different than the leisurely batting about of the shuttlecock that’s probably going on in your backyard. For instance, there are several “deception” strokes that the pros use to confuse their opponents. By slicing or using a shallow stroke, the hitting player can get his opponent to begin to move the wrong direction, then make the shuttlecock go in a completely different spot. Watch a badminton match and you’ll see what I’m talking about; this is no sport for wimps.

Though 50 different nations have competed in Olympic badminton, Asian countries dominate this sport. China has won 30 medals; South Korea has 17, and Indonesia has 18. The U.S. team could definitely use some talented athletes, so unpack that badminton net and get to work; maybe your family will achieve fame and accolades as Olympic badminton players.

“Table Tennis” is the more official-sounding term for Ping-pong. Maybe you have ping-pong table downstairs in the basement? If so, Olympic glory could be yours with enough practice. And you’ll need lots of practice. The really good players are able to get the ball to spin whilst slamming it across the net at the opponent. Shots to learn include the backspin, topspin, sidespin and the terrifying corkspin in which the axis of the spin causes the ball to bounce either left or right randomly. The speed at which professional play happens is enough to make you dizzy. If your idea of a successful ping-pong game is one where you are able to hit the ball back to your opponent more than twice, then Olympic table tennis might not be your game.

The Chinese have dominated table tennis since 1988, when it was introduced to the Olympic games. They’ve won 41 medals including 20 gold medals.

Everyone has days when they feel like picking something up and throwing it. Hard. Like when your kids junk up the den with pizza boxes and soda cans, then get snarky when you ask them to clean up their mess while they’re in the middle of playing Xbox. If throwing said Xbox is something you do on a regular basis, and you’ve become adept at throwing it long distances with some accuracy, you might explore an Olympic career in one of the four throwing events.

In the Middle Ages, soldiers held informal contests where they threw cannonballs in competitions similar to the modern shot put (bored soldiers have to do something with all those cannonballs). The modern sport requires athletes to hoist a heavy shot (16.1 lbs for men; 8.8 lbs for women) up to shoulder height, then throw it with one hand.

Check out ancient Greek art and you’ll find many examples of the discus throw. The sport dates back to at least 708 B.C. where athletes apparently showed their discus throwing prowess while naked (at least all the statues and paintings show muscular naked guys with discuses (or disci, if you’re so inclined). The discus isn’t as heavy as the shot (4.4 lbs. for men; 2.2 lbs. for women), but there’s cool spinning involved. To throw the discus, athletes spin around 1 ½ times to gain momentum, then let that discus fly.

King Henry VIII was lauded for his talent at hammer throwing. Go through enough ex-wives and anyone could get good at throwing hammers, I suppose. These aren’t the same hammers you’ll find at Home Depot. The hammer consists of a heavy ball attached to a wire. The athlete swings the ball over his or her head a few times, then spins around as many as four times before letting the thing fly. Don’t attempt this at home unless your homeowner’s policy has a low glass breakage deductible.

Javelin throwing was once very useful during war battles (back before tanks and chemical weapons). Now it’s an Olympic event, and the rules about how you throw it are very strict (unlike during war battles, when you just threw it in any manner that would sufficiently impale your enemy). There’s no spinning around allowed. Instead, athletes just run down a long runway to gain momentum.

Whichever Olympic sport you choose to pursue from the comfort of your home, it’s always a good idea to have professional coaching. Without the help of an expert, you could put an eye out with a ping-pong ball, suffer scuttlecock burn from a blazing-fast badminton serve, or impale the neighbor’s dog with your javelin. Signs.com does not encourage Olympic aspiration-fueled injuries, and will not be held responsible for readers’ inept, amateur attempts at any of these highly technical Olympic sports.