You might think that a barber’s pole is just a nostalgic sign that identifies a barber shop. But the barber’s pole hasn’t always symbolized a shave and haircut; it has a much bloodier history.

Main Street was once the lifeblood of every small town in America. On Main Street, you could find the diner. The shoe store. The pharmacy. And the barber shop. In Mayberry (the small town featured in The Andy Griffith Show), Floyd Lawson’s barber shop was the place to go for a haircut, a shave and the latest town gossip. The haircut would cost you a dollar; the shave just 35 cents (but your sideburns would probably be crooked). The gossip was free. Floyd’s shop, and the barber pole installed by the front door, represented a social gathering place.This nostalgic symbol of small-town America wasn’t all fiction; Floyd Lawson was based on a real barber from Andy Griffith’s real hometown.

While Floyd (and his real-life counterparts all over the country) might be just the guy to see for a close shave, you wouldn’t want him to use that straight-edge for anything other than removing excess facial hair. A well-trained, experienced barber rarely nicks his clients; blood is a sign that he’s screwed up. This was not always the case.

Barbers were once practitioners of medicine. During the Middle Ages, there were two kinds of surgeons: academic surgeons and barber-surgeons. Academic surgeons tried to figure out how the body worked. They had to accomplish this without actually studying anatomy on corpses, which was illegal. Instead, they just hacked up sick or injured people (with the intent of curing them, certainly) and tried to learn stuff before the patients died of their wounds or illnesses.

Barber-surgeons were more common and much less educated (most were illiterate). The barber-surgeon was the guy you saw when you weren’t immediately dying. He performed a host of gruesome tasks including tooth extraction, delousing of the scalp, applying leeches, and bloodletting. He also trimmed beards and cut hair (once you’ve been deloused, you may as well get a trim, right?)

The practice of bloodletting is the oldest medical procedure, dating back to antiquity. Ancient Egyptians, Mayans and Greeks all believed that it cured or prevented illness. But the Roman philosopher and physician, Galen, really got into the whole idea and he dedicated a big chunk of his time to making a complicated system with rules and charts for proper bloodletting.

Galen’s theory was that blood was one of the “humors” that had to be kept in balance in order to be healthy. The other three humors were phlegm, black bile and yellow bile (each of which are apparently different… but all icky). Galen was obviously a man with a high tolerance for dealing with gore. After studying all these bodily fluids, Galen decided  that, if you kept the humors healthy, all would be well. 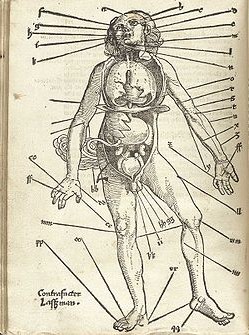 Galen didn’t know that blood circulated; he thought it was just used up by the body. He figured that blood in the extremities might just rot if there was too much of it. So he came up with an intricate system for bloodletting. He identified several dozen spots on the body where blood should be “let,” depending on the age of the patient, the malady and even the time of year.

Incisions were made at various spots (in either a vein or an artery), which might include everything from the forearm to the scalp, to the bottom of the feet, or (not for the faint of heart) even the genitals. Then blood was allowed to flow into a basin until the surgeon determined that enough blood had been released to return the “humor” to good health.

Sounds pretty medieval, right? Well, bloodletting was practiced all the way through the mid 1800’s. Our first President, George Washington, died from a throat infection in 1799. When he got sick, he requested bloodletting and had nearly 4 liters of blood removed before he died (presumably just from the infection, though the trauma of losing that much blood can’t have helped).

So historically, the barber-surgeon was the guy who performed the bloodletting, in between yanking out teeth with pliers and trimming beards. Once he was done with the bloody procedure in one area, he’d wrap bandages around the wound and start on the next. Then he’d wash the blood out of the bandages and hang them on the pole outside the shop, where they’d flap around in the wind to dry, and in the process, wrap and twist themselves around the pole.

If you were a medieval gent who was feeling a bit feverish, you might decide that a bloodletting would be just the ticket. And you’d look for the pole with the bandages wrapped around it to find the surgeon-barber (who hopefully would decide to slice into a nice vein in your forearm, instead of a more sensitive spot).

At some point, an anonymous marketing genius of the 1500 or 1600s painted a pole white and added red stripes to it to represent the bloodied bandages. This way, barbers could advertise their services all the time—not just while they were drying the laundry.

The Demise of the Barbershop Pole

Barbers themselves are increasingly rare; most people get haircuts from professional stylists whose services include hair coloring, perms and waxing. Your local beauty shop doesn’t keep leeches around and stylists won’t pull your teeth or slice into your veins. 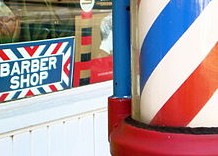 Folks who work as barbers still have specialized skills. For instance, in some states, you must be a barber (which might require a different license than that of a cosmetologist or hair stylist) to use a straight-edge razor for shaving services. Some states have tried to introduce legislation that requires you to be a barber to display a barbershop pole outside your shop.

Barbershop poles are also increasingly rare; now that shops use signage that displays the name of the business, the pole is really more a bit of decorative nostalgia than a sign.

The next time you visit your barber, you can be grateful that the shop doesn’t keep leeches around and that the guy with the straight-edge won’t use it for anything other than to give you a nice, close shave.