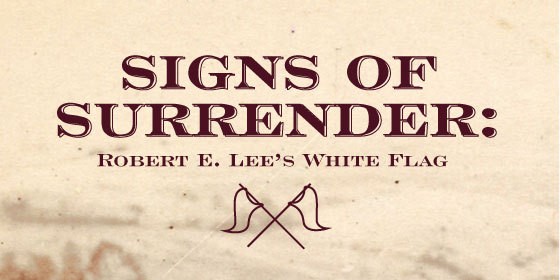 On this day in 1865, General Robert E. Lee surrendered to Lt. General Ulysses S. Grant, ending the Civil War. OK, so Lee didn’t have an actual white flag; just a metaphorical one. But by the time of the surrender, no one was particularly surprised; there had been signs of surrender for months.

The Civil War was the bloodiest war in American history. 750,000 soldiers died during the war (two-thirds from gangrene and dysentery). Historians estimate that 10 percent of men in the North died, and 30 percent of Southern men. Over 60,000 men suffered amputations during the war. It was not America’s finest hour, clearly.

Early in 1864, Ulysses S. Grant was placed in command of the Union armies by President Lincoln. Grant laid out an aggressive plan to attack the South from all directions. His plan of “total war” included destroying rail lines, farms and agricultural assets in order to weaken the South economically. Grant had the manpower and the financial power to make his plan work, and over the course of 1864, he began to chip away at the Confederate Army.

When General Sheridan finally beat back forces in the Shenandoah Valley, after months of trench warfare, he destroyed most of the agriculture there—the first of many signs that Lee was in trouble.

General Sherman captured Atlanta in September of 1864, another sign of major trouble for the Confederate Army and a guarantee of President Lincoln’s reelection. Confederate General Hood left Atlanta in defeat, only to be defeated again in both the Battle of Franklin and the Battle of Nashville, which finally finished off his army.

Sherman left Atlanta to work his way toward the ocean. Along the way, he burned and destroyed about 20% of the farmland in his path—another grim sign that the Confederates would go hungry that winter. By the time he got to Savannah, Georgia, Sherman was joined by hundreds of freed slaves and met almost no opposition.

By the end of March, 1864, General E. Lee’s army was hungry, exhausted and almost completely wiped out. On April 1, 1864, the Confederates lost the Battle of Five Forks and were forced to evacuate both Petersburg and Richmond. In a twist of irony, the Confederate capital was taken by the Union XXV Corps, a unit of black Union soldiers.

Once his supply lines were cut and he’d abandoned Richmond, Lee knew he was in trouble. He marched his hungry men to Amelia Courthouse, figuring he could resupply there and hook up with troops in Tennessee. When he got to Amelia and found no supplies, he had to send his men out to forage for food in the countryside. Telling your tired, hungry soldiers to forage for food is a bad sign that your army isn’t doing so well.

There was a supply train waiting for Lee in Appomattox, so he headed for that destination, only to be attacked again and defeated at Sayler’s Creek on April 6th. By the end of the day, 7,700 of Lee’s men had surrendered, along with 8 of Lee’s generals—just one more sign of defeat.

In the meantime, the fighting delayed Lee and Grant got to Appomattox first, where he promptly dispatched the supply train and dug in to wait for Lee.

Lee desperately needed supplies for his remaining men. He had some in Lynchburg, but he was quickly running out of time, and to get to Lynchburg he had to break through the Union cavalry. Unfortunately for Lee, he had no idea that the Union infantry was within marching distance, along with another 3 divisions of Union cavalry.

On the morning of April 9, 1865, Lee made his last stand at the Appomattox Courthouse. It didn’t go well. His troops were cut off at every turn until he finally had to concede defeat and face surrender.

Surrender and the End of the Civil War

General E. Lee surrendered to Grant on the afternoon of April 9th. The two men met at a nearby farmhouse that belonged to Wilmer McLean.

Grant agreed to let Lee’s troops go home to their families, and provided them with food for their return journey. He allowed them to keep both their rifles and their horses, which made it possible for the Southerners to plant their crops that spring. By 4:00 pm, the surrender agreements were signed and the Civil War was over.