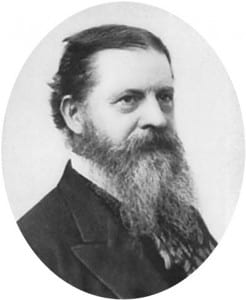 Before yesterday I had never heard of Charles Sanders Peirce and it is pretty safe to assume neither have you. I stumbled upon Peirce by accident while doing some research on the history of signage. Peirce was quite the man; he is well known for his contributions to math, philosophy, science and logic. Part of his theory on logic is the concept of signs. At first I was elated, believing I had found some deep philosophical revelation about signage. I quickly realized that to Peirce, a sign was not like a banner, billboard or car wrap. His version of a sign was more along the lines of “it was a sign that I was supposed to marry that girl” or “that thunder is a sign of a coming storm.” Dictionary.com defines a sign as, “any object, action, event, pattern, etc., that conveys a meaning.” Although slightly disappointed, as I continued reading I found that Peirce’s theory began to sound a lot like what I had been taught about marketing in my business school classes. Here are the details of Peirce’s theory on sign relation:

What Peirce concludes is that signs are determined by their relationships with other things: an object and an interpretation. An object creates a sign (action, feeling, memory, etc.) which leads to an interpretant (the effect of the object on the mind). All three are connected and relational to one another.  In marketing, and more specifically in signage, we create objects that evoke reactions or interpretations by the viewers in order to facilitate a desired outcome. For example, a small business creates a window decal that displays the word SALE in hopes that consumers will interpret that there is a discount on the goods being sold and therefore enter the store and purchase.

Seems pretty straightforward right? But what happens when the interpretation is a negative one? Let’s look at another real world example. I have an 18 mile drive to work every day, which, depending on traffic gives me a decent amount of time to be inundated with outdoor signage. One day a particular billboard caught my attention, not because I immediately related to the product but simply because the sign made no sense. The design split the billboard into two halves. On the left was something about zombie attacks and chainsaws (I thought it was an ad for the newest video game). The other side was talking about a company that specialized in anti-virus software. The look and feel of the billboard was fairly good, easily readable, even traveling at a high rate of speed. The issue was that it looked as if there were two advertising messages on a single billboard and by the time I finished focusing on the zombies, it was almost too late to see what the other side read. My interpretation of the sign was incorrect based on the design.

Since I drive the same route each day, I had the opportunity to pass the same sign multiple times and eventually between the driving and managing the occasional road rage, I figured out what was going on. The software company thought they were being clever by saying that if zombies attacked, a chainsaw might be useful, but if you get a computer virus, their company is the useful solution. Again, clever, but in execution, disaster. A viewer that only passed the sign once or twice would probably never connect the dots and most likely would never purchase any anti-virus software.

So how do we avoid these same mistakes? Peirce’s principles can only take us so far. His theory simply acknowledges the fact that a relationship exists between a single object and how it is interpreted. As business owners, designers, and marketers, we have to determine how we can control the interpretation so that what we desire as the outcome actually happens. Here are some good principles to live by when creating a sign:

1. Keep it simple – Think about your message as if you were the viewer. If it is too much copy or too confusing, your sign will be ignored.
2. Keep it legible – Think about the distance between the viewers and your sign. Can they read it? Make sure your URL or phone number is clearly displayed.
3. Keep it consistent – Over-creative imagery or text could lead to improper interpretation. Choose graphics that easily convey what your core business is and what action you want the viewer to take.

So whether you are designing your own sign or hiring a designer to come up with a concept, hopefully you will remember Charles Peirce and think, it’s not about the sign itself, it’s about the signs that it creates.