I live in an area where there are a lot of mule deer; two herds of about 25 deer each roam in the foothills above our home. Every evening they wander down to an area near the road to nibble on the grass that is apparently much tastier there than the grass elsewhere. Luckily, the speed limit is low and I’ve never seen a deer get hit there. But my constant anxiety over the safety of “Bambi” made me wonder how effective deer signage is at preventing accidents. 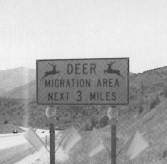 Nationwide, deer create a problem for motorists (or motorists create a problem for deer, depending on how you look at it). State Farm estimates that 1.09 million deer-vehicle collisions occurred between July 1, 2010 and June 30, 2011. The average property damage of these incidents was $3,171. Sometimes the collisions include serious injury or death to humans. For deer, getting hit by a car almost always means death and suffering. In fact, some studies estimate that as many as 75% of deer deaths are the result of automobile collisions. (1) Clearly, deer vs. car is a serious problem.

Signs for Humans: The Study

Researchers in Utah, Nevada and Idaho conducted a study to see if more specific signage could decrease the number of deer-vehicle collisions. (2) The majority of incidents happen during the migration seasons in the spring and fall. They occur in particular spots along the highway where deer cross along migration paths, so the researchers identified migration corridors based on previous records of deer deaths between specific mileposts. Then they constructed special temporary road signs that included flashing lights and orange flags. These signs would only be used during migration periods, then would be folded up and removed. It worked. Researchers found that motorists slowed down when they saw the signs—speeds declined by 50 percent. And, deer mortality rates fell between 41.5 and 58.6 percent.

The researchers believe that the trick is to introduce the temporary signs only during the deer migration period.  Signs are common along the highway in areas where deer are present, but research has found that these signs aren’t very effective at preventing collisions . It’s kind of like the little boy crying wolf . . . the effect wears off after awhile and people don’t take the warnings seriously. Then, when there really is high potential for danger, no one pays attention. Motorists take the signs more seriously if they’re only present during the highest period of risk. They slow down, watch for the deer, and as a result, avoid hitting them.

Signs for Deer: The Study

Another study was done to see if deer would respond to their own version of signage. (3) Reflectors are often posted along the highway near deer migration paths. These reflectors redirect light from car headlights, across the road and onto the shoulder and are supposed to, “provide an optical warning fence to deer.” Since deer can’t read a “Warning: Human Driving Area” sign, reflectors are supposed to serve as a sign that deer can understand. The reflectors come in four different colors: red, white, blue-green and amber. The researchers in the study placed reflectors in known migration paths and rotated the colors to see if any one color would do better than another.

The finding: turns out deer don’t really read any kind of sign. In fact, the number of deer-automobile interactions actually increased with the use of the reflectors (the blue-green color seemed to be the worst). Researchers believe that the reflectors might actually overwhelmed the deers’ visual systems.

These two studies taught us a few things about signage: