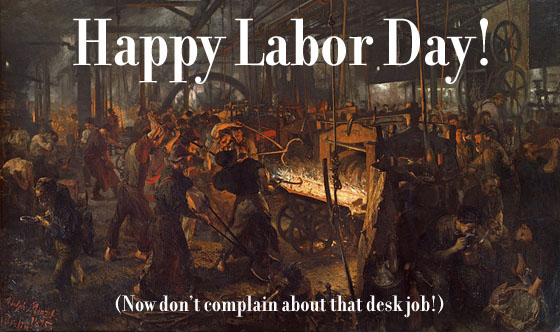 During the nineteenth century, workers in the United States worked long days in tough conditions. With the introduction of factories and a huge migration in to large cities, workers found themselves abandoning the natural work cycle that depended on the sun and instead punching a time clock. The more hours a worker worked, the more product was produced. In steel mills and slaughterhouses, on production lines and sewing floors, workers spent as many as 17 hours a day working at a frantic pace in order to keep their jobs. Thanks to the labor movement, that’s all changed. Kind of . . .

Unions began to form in the 1920s, and the labor movement became more and more organized as time went by. Organizers saw themselves as saviors of the overworked American, naming their groups things like, “The Knights of Labor” and “The Brotherhood of Carpenters and Joiners of America.” The groups sought rights for workers, including shorter work days, set pay scales and mandatory breaks. Workers went on strike in order to gain benefits and improve conditions.

The Creation of Labor Day

The formation of Labor Day has been credited to Peter McGuire, a carpenter and founder of the Brotherhood of Carpenters and Joiners of America. Others credit the holiday to Matthew Maguire, a machinist and the secretary of the Central Labor Union in New York. Both men were great activists in the labor movement.

The first Labor Day was celebrated on September 5, 1882 in New York City. There was a parade in the street, followed by a huge picnic and festival. Part of the goal was to demonstrate for workers’ rights, but it was also a way for working people to take a day off and enjoy themselves.

Today, Americans enjoy many workplace rights that were designed with factory workers in mind. The “eight-hour workday,” mandatory overtime and work breaks throughout the day, minimum wage, unemployment . . . all were legislated thanks to the labor movement. But are today’s American workers enjoying a blissful, forty hour workweek?

Many Americans are actually working an increasingly larger number of hours every week. The Washington Times reports that:

In the 1970’s, 34% of men in professional-managerial positions Today, 38% of men in these positions work 50-hours or more per week.  As far as middle- income male workers are concerned, 21% worked more than 50-hours per week in the 1970’s, whereas now 23% of male workers are at the mercy of their employers for a minimum of 50-hours per week.  An even larger discrepancy can be seen with professional women, of whom only 6% worked 50-hours or more per week in the 1970’s, whereas this figure has since more than doubled.”

Are we going backwards from the days of the labor movement? Our increasingly longer work days are contributing to health problems including stress, obesity and heart disease.

This year, enjoy your day off and your Labor Day picnic or BBQ. And think about how many hours you’re working and why you’re doing it. Is your quality of life increasing, or decreasing? During the 1900’s, workers put in long hours just to put food on the table and shoes on the feet of their children. They fought long and hard to earn the rights to work more humane hours. Are you working long hours to put a plasma TV in the family room and video games in the hands of your children?

In a speech at the 1902 Carpenters’ Convention, Peter McGuire said, “A man wears out like a piece of machinery . . . I am not lost entirely in this world but I have had enough to wreck me physically, destroy me mentally.” He died a few years later.