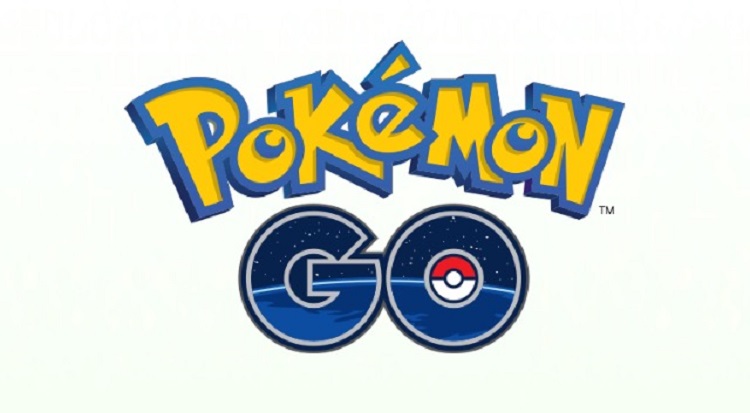 Wanna catch ‘em all? The new mobile game Pokemon Go is taking the world by storm. Less than a week old and the phenomenon is growing day-by-day. The game created in collaboration by former Google startup, Niantic, Inc & The Pokemon Company is a new twist on the TV show, card and video game series that was popular in the late 90s and early 2000s. While many people have downloaded the game (over 7.5 million in the United States) and rushed to streets and parks to get in on the action, there is a still some mystery to how the game is played and how it might evolve over time.

Gotta Catch ’em All! How Your Business Can Catch Pokemon Go Trainers

Many businesses have taken advantage of the new platform to bring “trainers” nearby on their quest for these fictional creatures. We’ve learned a little bit on how your small business can bring in “trainers” and try to catch ‘em all. After a brief overview of the game we’ll go over how your business can take advantage of this new craze and how it might be monetized in the future.

What is Pokemon Go? 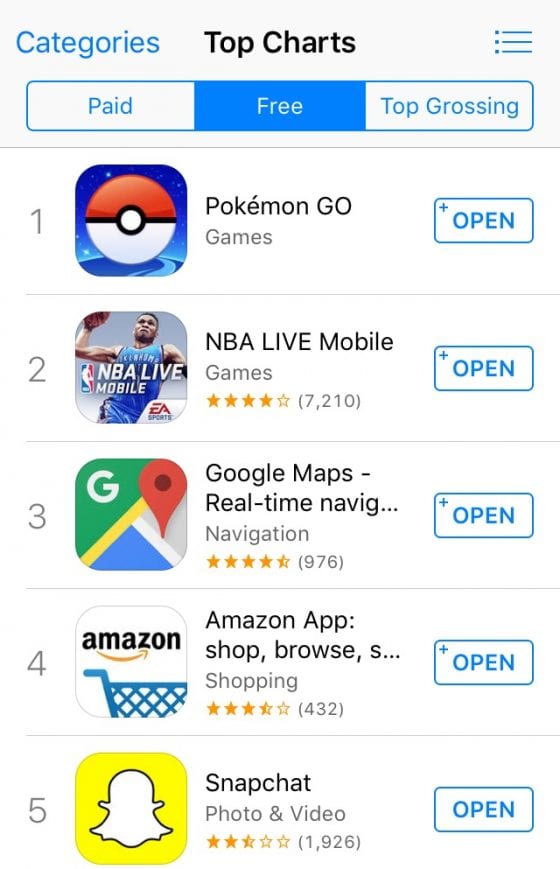 Pokemon Go is the #1 free game in the United States and much of the world right now! Before we breakdown how you can take advantage of all of the gamers out there we wanted to provide a little more background on what the game is as well as some of the ins and outs of it. The game is based on smartphones/mobile devices and is currently available on the Apple App Store and the Google Play Store as a free download with in-app purchases. Be sure to download from these official stores only as there are reports of malware from other sources.

How Do You Play Pokemon Go? 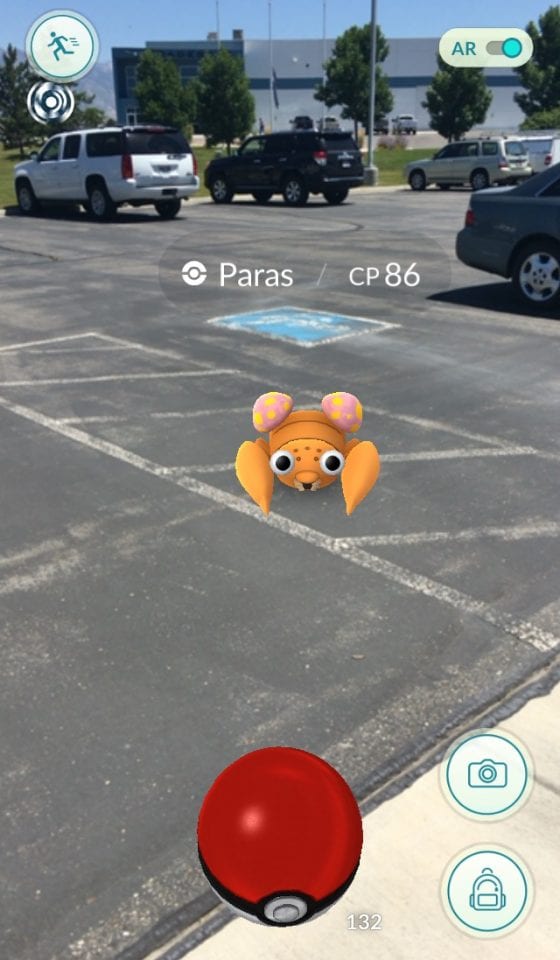 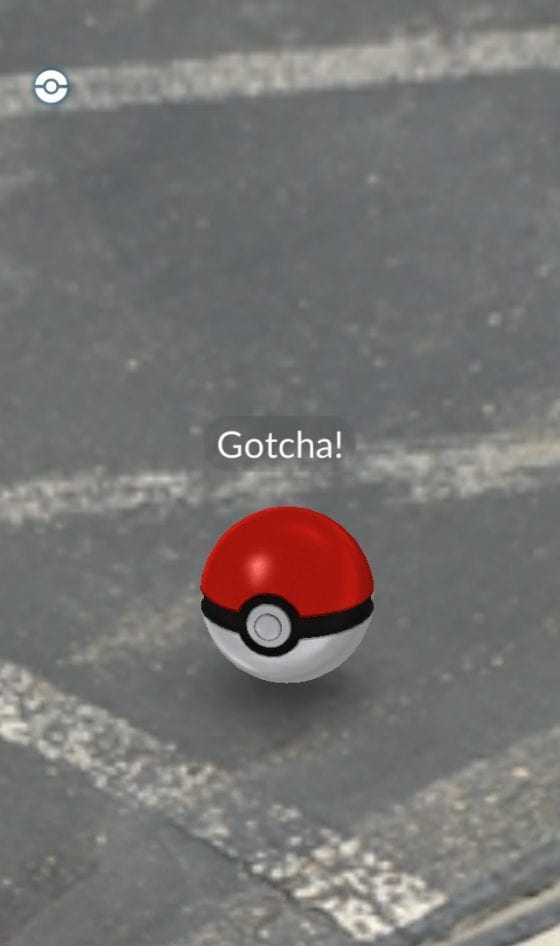 With your internet connected mobile device or smartphone! The game is a “real world adventure” that combines the virtual world of Pokemon and planet Earth. Virtual Reality or VR seems to be the latest fad increasing in popularity the past couple of years and whose goal is to create a virtual world that users can interact with which Pokemon Go follows right in line with. Pokemon Go is not strictly a game of virtual reality but rather augmented reality which combines a virtual world with real life. The game comes with an augmented reality toggle built in for users to can their perspective from reality to virtual setting.

Pokemon has a massive fan base due to its success in the past couple decades. But this was a new project for the company, unlike anything they’ve done before. It’s a combination of the past (similar to the early Pokemon Nintendo GameBoy games) and the future of technology (smartphones, AR/VR, etc.). This has helped the game virally come onto the scene and be instantly familiar. But the twist of new technology might be what takes this game to the next level and helps retain players while providing the company and businesses a tool for monetization. TechCrunch points out the brilliance behind Pokemon Go in offering the player a fun and free game to play while also providing “a delightful experience when they elect to spend money”.

The game begins with your creation of a virtual character or “trainer” that you control based on your movement on a digital map similar to Google or Apple Maps. As you move to different locations you come across digital animal/creatures called Pokemon. You are able to catch, battle with, and evolve/grow these Pokemon over time. The goal and slogan of Pokemon dating back to its origin is to catch all of the Pokemon, which in Pokemon Go are 250 individual creatures.

Where Do You Play Pokemon Go?

Anywhere and everwhere! As you move throughout the map/world you also come across places marked as PokeStops and Gyms marked by colorful pillars on the digital map. PokeStops are typically marked at businesses, landmarks, along with places of interest like parks, churches, and schools.

Even my local rice and beans joint has been invaded… #pokemon

Gyms are also found in similar places and are claimed by trainers who can join 1 of 3 teams in the game. Gyms are used to train and grow Pokemon or to battle opposing teams for ownerships of the gym.

When Can You Play Pokemon Go?

Pokemon Go is up and running 24/7! That is of course if Niantic and Pokemon have their servers up and running. This has been a consistent issue for many users since the app’s launch last week. The iOS version received its first major update on July 12th which squashed many of the game’s early bugs although issues may still exist for users.

Why and How to Use Pokemon Go as a Business? 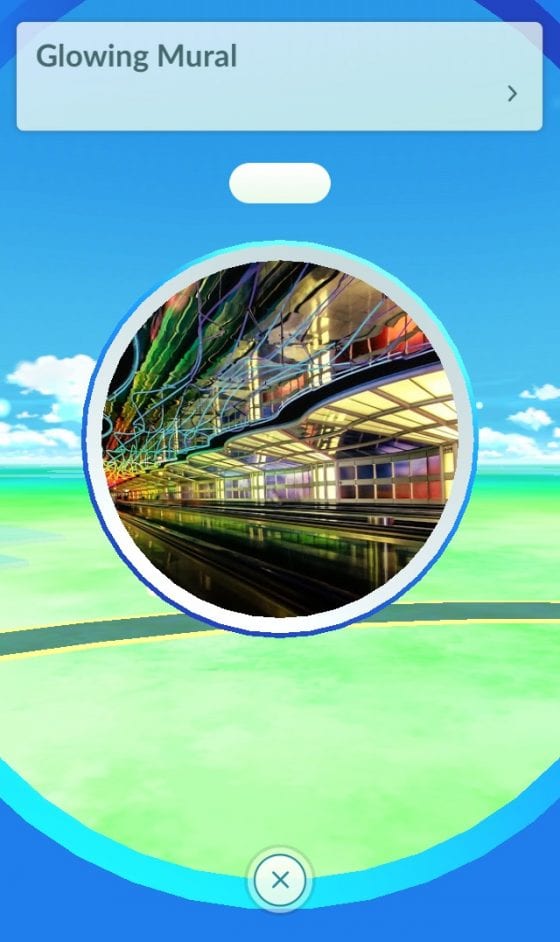 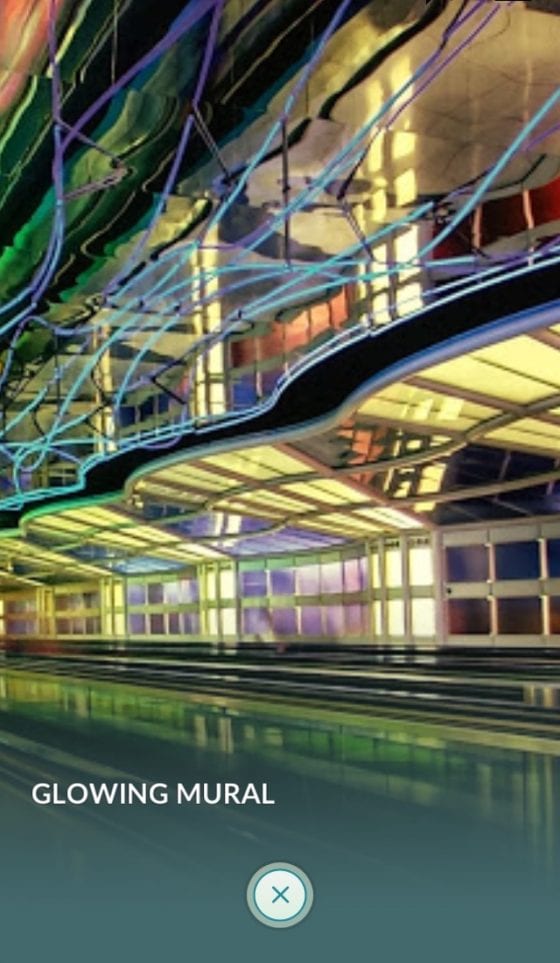 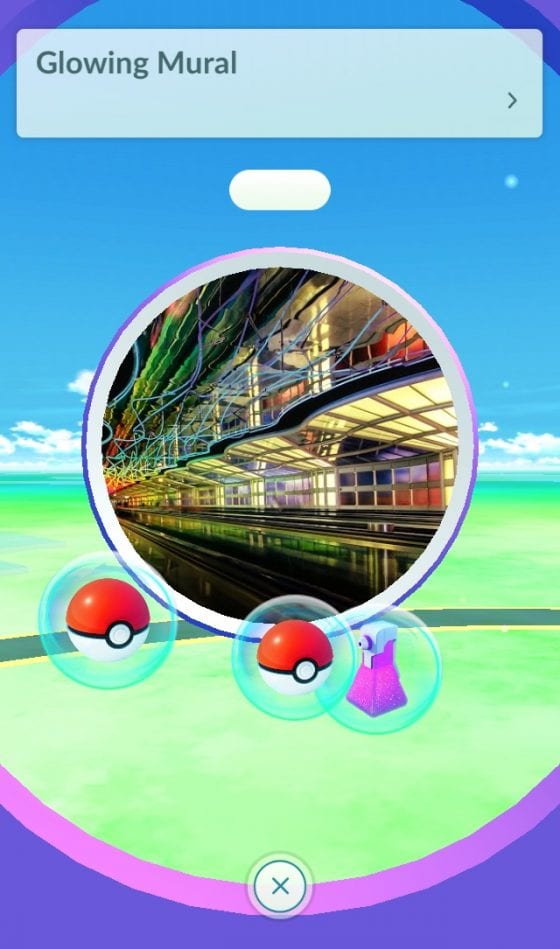 Gain more customers! Here at Signs.com you’ll find a PokeStop marked as the “Glowing Mural”. At PokeStops like the Glowing Mural, trainers are able to collect randomized items that help with different tasks in the game. Trainers are also able to purchase virtual money called PokeCoins through in-app purchases and buy these fictional items as well.

One of the items available to buy is called a lure. A lure once purchased and activated at a location attracts Pokemon to that general area for the next 30 minutes. For many businesses such as restaurants and retail shops this is where your opportunity exists. 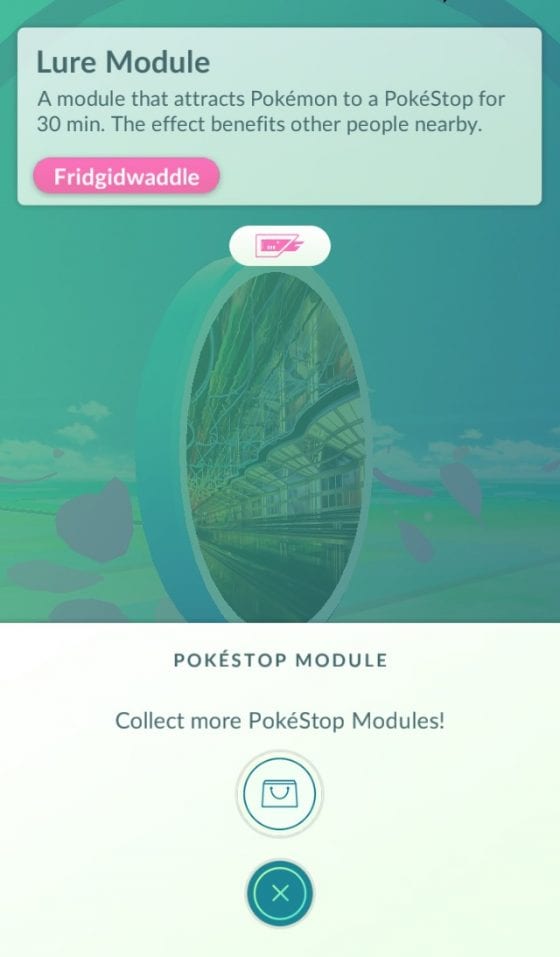 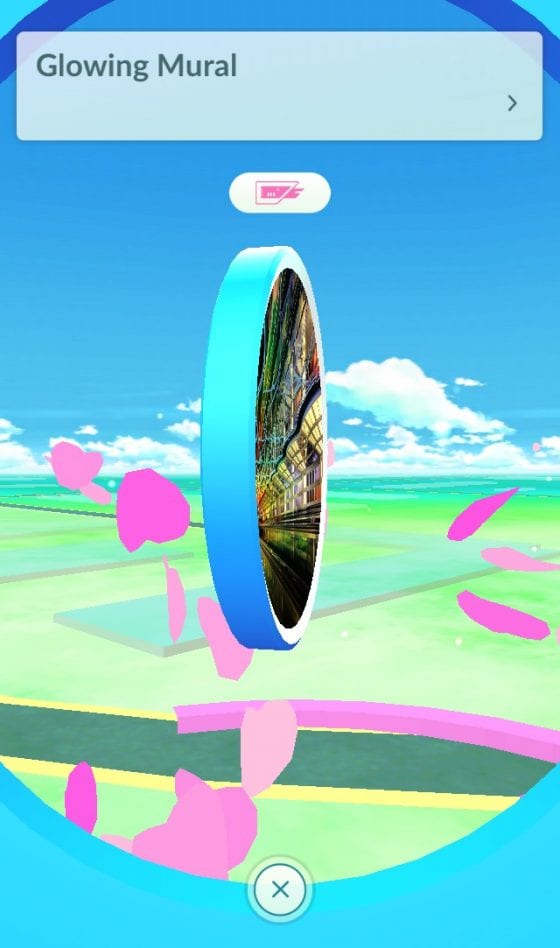 A new app to partner with these Pokemon Go lures has already been created. Although not yet available on either app store, the app, LureSquad is advertised as a way to monetize this new frenzy for businesses. According to Forbes, the app’s purpose is to “encourage businesses to request lures from players to create a treasure trove of Pokemon, which in turn would lure in customers” and in exchange the business would offer rewards to trainers. For example, some restaurants has given away free food for Pokemon trainers.

Even the pretzel place in my mall is getting in on the Pokemon Go craze! (Free Pretzel!)

My aunt: “Reagan I have a job for you…” The job was to create a Pokemon lure & drop it in her restaurant so that more people would come

When you pick which restaurant you want to eat at just so you can be near a Lure Module #PokemonGO pic.twitter.com/NrN20fiaIa

So this restaurant next to my work already dropped a lure on their business today…. It’s gunna be a good day. #PokemonGo

Millions and millions of people have downloaded this game and are out and about looking for Pokemon. What better way to bring them into your business than to have Pokemon waiting for them? Simply purchase some lures and activate them through your hours of operation and watch the people come to catch ‘em all. That is of course if you’re in a location that has consistent foot traffic. For many businesses this won’t be a means of customer acquisition at least not for the time being (i.e. production facilities, manufacturers, etc.). But many small businesses should take advantage of this opportunity just as restaurants like Olive Garden has.

And here we were just trying to catch lunch. #PokémonGo pic.twitter.com/2Zk3GF55ST

Niantic CEO, John Hanke acknowledged that the game would evolve over time and according to The New York Times “would eventually give the company another intriguing money-making possibility, by charging fast food-restaurants, coffee shops, and other retail establishments to become sponsored locations where people are motivated to go pick up virtual loot.” The company has created opportunities like this in a previous game and Hanke said they would announce sponsored locations for Pokemon Go in the future as well.

Pokemon Go is a new product and will evolve in the weeks and months to come. Soon your business will be able to purchase and make your location a PokeStop like our “Glowing Mural” at Signs.com which was randomly made a PokeStop at launch.  Who knows how long the game will be the talk of the town and if it truly is a sustainable model for both the game developers and you as a business. Until things play out in the future, be sure to take advantage of the game’s current popularity and bring people into your business just as many others have already done.

The pizza place that I work at just put up this sign.

At Signs.com we offer a variety of sign types that can be placed outside a business and help attract these Pokemon trainers in. This can be a simple yet useful way to take advantage of the current format of the game. And while you wait trainers to come you can give the game a try too! 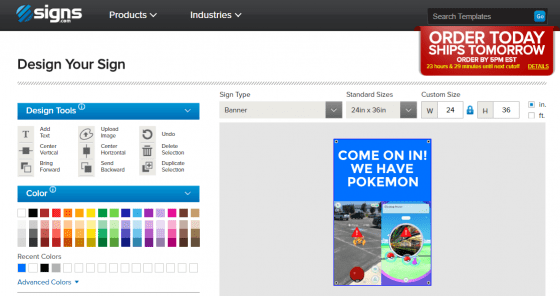