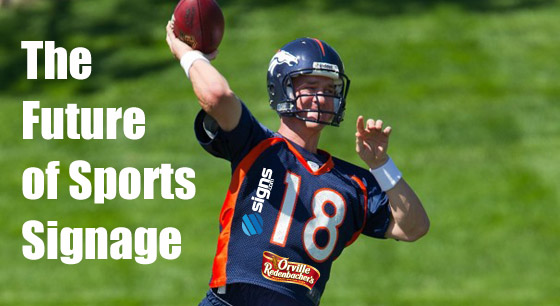 Update 7/20 3:15: The definition of irony – arbitrarily writing a blog post and then  24 hours later it comes to pass. Yesterday, the NBA approved a new look for team jerseys. Starting in 2013-2014 seasons, the NBA will allow small advertising patches on jerseys saying it will add close to $100 million in revenue. For more on this story, check out the links below. What league will be next?

It is pretty common knowledge that our society is inundated with advertising, corporate signs and marketing campaigns. From traditional TV and radio spots, to remarketed online banner ads to our personal social media profiles, advertising has become so prevalent that we almost don’t acknowledge its impact on our daily lives.

Sport in particular has become the beacon in targeted advertising (how many millions for a Super Bowl ad now?). Games that once took an hour are now being stretched 3, 4, sometimes 5 hours so TV stations can get in their allotted (sold) airtime. But it is not just TV; stadiums are now plastered with corporate signage. The Olympics sells exclusivity rights to the highest bidder and athletes’ jerseys now display the logo of a sponsoring company!

Wait, what? You mean that when I watch my beloved Denver Broncos (shameless plug) I have to see Peyton Manning wearing a new jersey with Orville Redenbacher’s® face on the front promoting low fat popcorn? OK, that may be an extreme example but it is not too far from reality. In fact, jersey sponsorships are a widely accepted practice around the globe. Here in the U.S. of A. we haven’t really experienced it, but athletes as walking, talking, jumping signs are just around the corner.

As recently as April, the New York Times ran an article about the NBA strongly considering the possibility of adding sponsored jerseys. This would be a huge step since it is widely known that the BIG 4 major sports leagues (MLB, NFL, NBA, NHL) in America are rooted in their traditions and are slow to adopt new ideas. The tug-of-war between decades-old traditions and progressive thinking is nothing new, but what is crystal clear is that the Golden Rule is always in play. You know, the one that says, those who have the gold make the rules. In this case, the ones with the gold are corporations. Just look at what has happened with new stadiums over the years. More luxury boxes, vip parking and special events, not catered to “Joe the Plumber” but “Joe the CEO.” 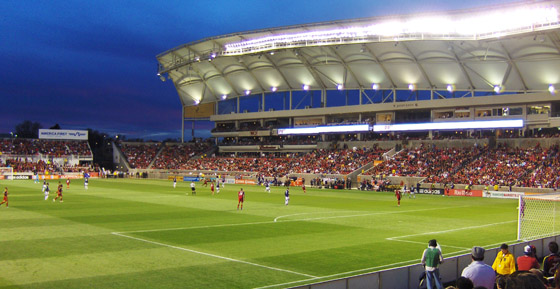 Other leagues like Major League Soccer and the WNBA have already adopted the practice of selling jersey sponsorships to bring in more revenue. In fact, here in Salt Lake, the local MLS soccer team Real Salt Lake became the first franchise to offer jersey sponsorships. And, for the most part, it has been successful. The NY Times article goes on to quote Kathy Carter of Soccer United Marketing saying, “We didn’t look at whether or not the American fan would accept it, but whether or not the soccer fan would accept it. There are other sports in the U.S. that are held to a different standard because of the history of their games. But we’re part of a global sport. Soccer fans look at this through a different lens.”

Sure, purists might argue that we are destroying our games with advertising but as another article in the USA Today points out, “Remember when we all thought the world was coming to an end when sponsors renamed bowl games and stadiums? Now, we barely give that a second thought.” The same can be said for jerseys. It is just a matter of time before our favorite athletes and teams are sporting the logo of some company who paid $50 million to be there. I guess it could be worse. Besides, I kind of like popcorn.