Summer is in full swing and budding entrepreneurs seem to be everywhere. There are a lot of kids in my neighborhood getting experience at running their own businesses. I think it’s great – kids get pretty bored in the summer, and running a business is a much better way to spend time than playing video games.

When I was a kid, I had several businesses. In addition to babysitting and an occasional lemonade stand, I once painted rocks and went door-to-door with my little sister, selling them as “decorative items.” My mom was mortified once she found out what we were up to, but by then we’d make several bucks and spent it on treats from the ice cream truck. And I’m sure the neighbors enjoyed the decorative aspects of their new purchases (or maybe not. But they were very kind and supportive of our business enterprise).

Here are a few examples of great kids in my home town and their brilliant business ideas.

Hannah is nine. She’s a smart, savvy kid who can’t imagine spending the summer watching television and sitting around. So she opened a business. Trusted Helpful Services offers… you guessed it . . . services! Hannah will help you water your lawn, walk your dog, organize your closets and whatever else you can think of that you might need.

Hannah’s dad owns his own business, so she witnesses first-hand what it’s like to be an entrepreneur. She’s lucky to have a great mentor. When she introduced herself and her business, she did several things right. 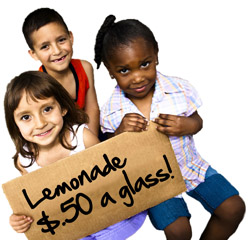 Every kid should have a lemonade stand at least once during the summer. I see a lot of stands in the neighborhood, but one really stood out last week. I stopped and got a cup of delicious, ice-cold lemonade from two little kids a few blocks from my house.

Sam is seven; he’s the big brother and marketing director. Jen is five; she is the sales force and lemonade manufacturer (my titles, based on the job descriptions they gave me). They were both very professional. Here’s what they did right:

A little girl knocked on my door yesterday, selling tickets to a car wash fundraiser. I’m always a sucker for a fundraiser, so I was ready to buy one anyway. But I have to say, if Kylee’s softball pitch is anywhere near as good as her sales pitch, she’ll be an all-star player. Kylee was about eleven years old. Her team needed money for an overnight trip to a tournament, so they were hosting a car wash. For $10 you could get a wash, dry and vacuum. I bought two and I won’t even be in town on the day of the event. Here’s what Kylee did right:

Encourage Your Kids to Start a Business

The next time you hear, “Mom! I’m boooored,” put your kids to work. Encourage them to come up with a business idea. They’ll learn a lot, make a little bit of cash and get out from in front of the TV.