Oh, my darling retail shops. You tease me with your fickle fervor. First you’re hot, then you’re cold. You make me perspire and bring a flush to my cheeks. Then your icy-hearted  indifference blows chilly, freezing my fingers and nose and leaving me out in the cold.

Seriously. What is up with the crazy temperatures of stores? I went to the mall last weekend to do a bit of browsing and I was uncomfortable the whole time. I left without purchasing anything, mostly because I didn’t browse for long in any one store.

The time of year doesn’t help. In early April, my town’s temperature can vary from 32 degrees to 75 degrees. Shop owners don’t know what to do with their heating and cooling systems, so they tend to just set them one direction or the other, without concern for the daily temperature.

On my shopping day, the temperature was an April-ish 55 degrees. Too chilly for short sleeves, but too warm for a winter coat. I was dressed perfectly (if I do say so myself) in a short-sleeved t-shirt and a cute spring jacket.

The first shop I went into had tons of cute stuff and I had lots of energy at the beginning of the trip. I started to grab things off the racks, but within minutes my fingers, ears and nose were cold. It was freezing in there! As I moved toward a table of spring sweaters, I walked directly under the vent and was treated to a blast of freezing cold air. Apparently, the air conditioning was on full force, for my comfort. By the time I’d cruised the offerings of the store, my fingers were literally so cold that I was blowing on them to warm them up. I couldn’t imagine getting nude in this kind of polar atmosphere, so I decided against trying anything on and left the store for warmer climes.

I certainly found them. In the next store, the furnace was fired up, blasting hot air everywhere. After five minutes in the store, I had removed my jacket, draping it over one arm, which made it difficult to pull things off the shelves and racks. Another five minutes and I was blotting my brow (no, I don’t sweat. I just glow. Beautifully, I might add). I began to feel a little faint. It must have been well over 80 degrees in that shop. I might have been tempted to try on a few items, but after fifteen minutes in the store I was feeling seriously ill. I began to have hallucinations of Dante in the Inferno, so I got the H-E-Double-L out of there.

The perfect trajectory for this story would be a Goldilocks moment when I entered the third store, which was juuuust right. No such luck. Every store I entered was either freezing cold or blasting hot.

The stores I visited missed a great opportunity. Not only did I leave even though I was ready to spend money at their stores, the stores could have saved money on heating and cooling costs if they had just set one system at 68 degrees. 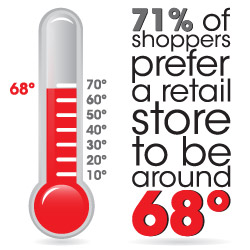 However, when the same people were quizzed about what temperature they prefer in a retail store, 71% answered neutral (which was defined as around 68 degrees).

The researchers conducted several studies in retail shops. They found that in very warm or very cold temperatures, customers were less likely to browse and more likely to leave without buying anything.

Another study showed that customers perceived a “too hot” store as one of the most irritating aspects of the shopping environment. A “too cold” store was not quite as irritating, but it still made the list. (2)

The hypotheses of both studies were certainly proved on my shopping trip. Not only did I leave without a cute new Easter outfit, I was cranky and irritated by the time I headed for the parking lot.

I had much better luck a few days later, at a small retail shop on Main Street. That store’s manager had figured out a temperature worthy of the three bears. Comfortably shopping in my cute spring jacket, I bought an entire Easter outfit (plus two more that I just couldn’t resist).

1. Stephanie Engbrocks. The Impact of Temperature on a Consumer’s Shopping Experience. 2008
2. Alain D’Astous. “Irritating Aspects of the Shopping Environment.” 2000.