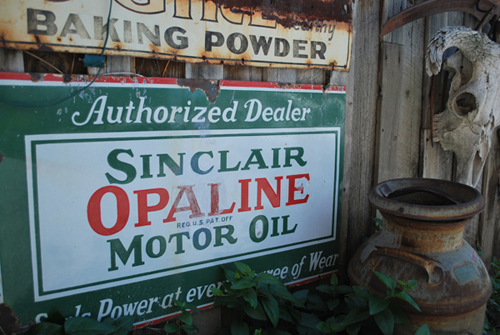 A few weeks ago, I had the pleasure of meeting with Jim Oswald, an antique sign collector. I was prepared to go in and see a room with a few dozen old signs and hear a few stories. Boy was I in for a pleasant surprise! Jim not only has hundreds of signs, he has a wealth of knowledge about what he collects. I stayed for over two hours before I could tear myself away . . . I could have spent an entire week learning from Jim and enjoying his amazing collection.

Jim got started with antiques when he worked for Z.C.M.I. (a Salt Lake City department store), restoring antique furniture to sell. During that time, he began collecting jukeboxes and Coke machines. 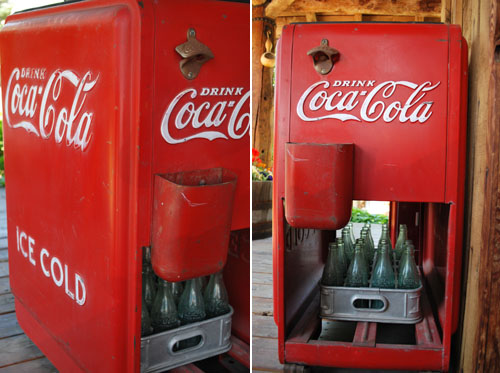 Later, Jim worked as police officer in his hometown, rising up the ranks to become police chief. But he never lost his interest in beautiful, old things. Jim became interested in old gas and oil fixtures and signs and started collecting them as a hobby. There’s a community of collectors that specialize in signage from that industry and Jim has some rare, unique pieces.

I wondered how Jim had amassed his unbelievable collection. “I’m an original picker,” Jim said. Way before the television show, American Pickers, Jim was driving through rural parts of the country, looking for old barns, gas stations, businesses and bars. He asks owners if he can grub around to see if there’s anything interesting, then makes them an offer if they’re willing to sell. Like the guys on American Pickers, Jim sometimes finds great stuff in unlikely locations. He once located several globes in the attic of a gas station. The owner was even more surprised than Jim – he was sure that the property had been thoroughly cleaned out years ago. 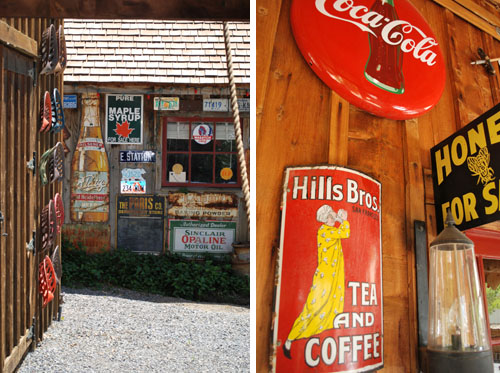 Though Jim is in the market to collect, resell and make money, he’s careful to never gouge the people he’s buying from, many of whom have no idea what their antique signs are worth.

“There’s got to be room for everybody on the chain,” Jim said, “The guy makes some money from his stuff, I make some money when I sell it. The guy who buys it from me is going to sell it and make some money. So everybody makes a little bit and nobody kills anybody. The farmer has no clue how to get rid of that sign. But I have 2,000 names of collectors all over the country, I do swap meets. I know how to sell the signs.”

I asked Jim, “What makes a sign valuable?” He told me there are four factors: Age, rarity, graphics and condition. The graphics are why Jim got into collecting, “Art is why I got into this to start with. I love the art of the old furniture. I love the art of the old signs and so everything that I collect, I try to collect things that have a lot of graphics.” Signs created in shapes, especially relating to the product are more valuable.

Signs featuring animals, Indians, race cars and airplanes are of particular interest to collectors. Wasatch Oil features an Indian, which is one reason it’s so popular.

In porcelain signs, the more colors, the longer the process. Each color has to be baked in an oven. Creators spray the paint on, bake it, then spray it again and bake it, etc. A sign with many colors and detail has more processes. 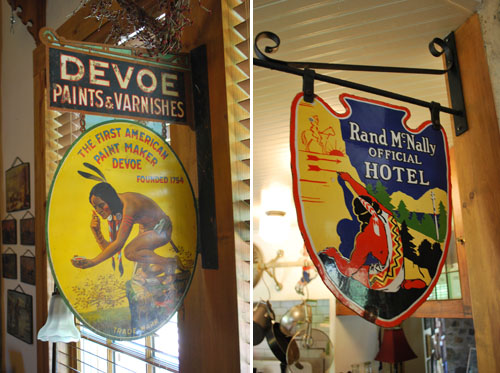 Jim told me, “The older the sign, the better the graphics. These signs will last 500-600 years. The signs are steel base, sprayed with porcelain and baked. If you drop it, it will chip or break.” As Jim began collecting, he noticed many signs that were ruined. He thought, “Some of these neat old signs that are destroyed, I thought, ‘someone should save these’ . . . so I began restoring porcelain signs professionally.” Jim has restored over 2,500 signs. He told me that once restored, 80% of the original value is returned.

I’d like to thank Jim Oswald for his time and willingness to share his passion, enthusiasm and incredible knowledge about antique signs with both me and my readers!