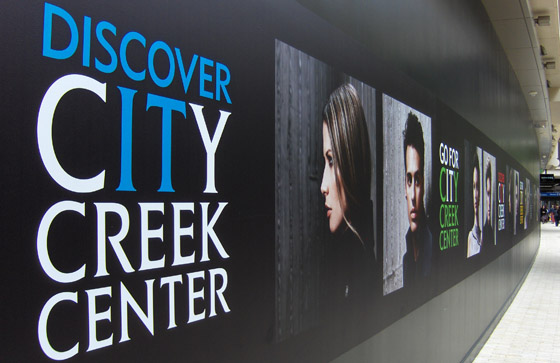 The new City Creek Center in downtown Salt Lake City opened on March 22nd last week but since I was otherwise engaged in Florida at the ISA Expo, I haven’t been able to see the new $1.5 billion dollar redevelopment for myself. The project has been getting national attention. Erin Harper at the Huffington Post went so far as to ask the question if it was sexy (full article), a term not usually associated with Utah. So this week, I was on a mission. Not only to take in the massive 700,000 square foot complex, but to see how a brand new development like City Creek uses signage.

While walking around the first thing I notice is the branding and more importantly the reinforcement of the brand. It is everywhere. A couple weeks ago on Facebook we mentioned the huge building wraps done by a local large format printer, Ferrari Color. Well, they have taken the same designs and literally branded everything from the directory signs, to the signs on the light poles, to the unfinished storefronts. The upscale brand feels . . . well upscale. Like you are experiencing a different type of shopping. 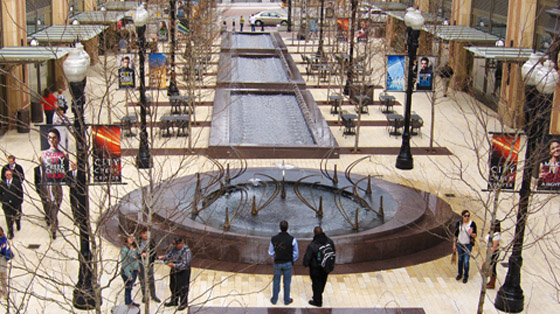 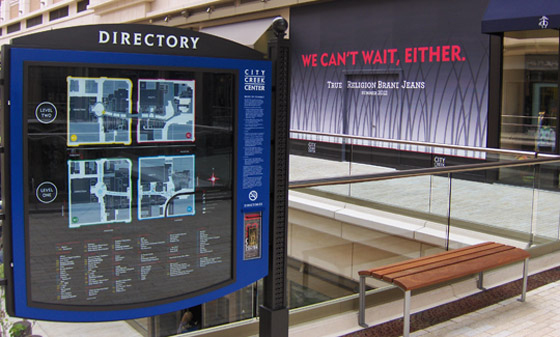 The second thing that jumps out is the architecture. I guess I was expecting over-the-top but it is just the opposite. In fact, it’s almost subdued. Above are open aired, retractable roofs and below a stream with plants, rocks and actual fish. You almost forget you are in the middle of a crowded mall. You find yourself looking up at the sky and the shadows cast from the silhouettes of taller buildings – albeit the only four or five tall buildings that we have in Salt Lake. 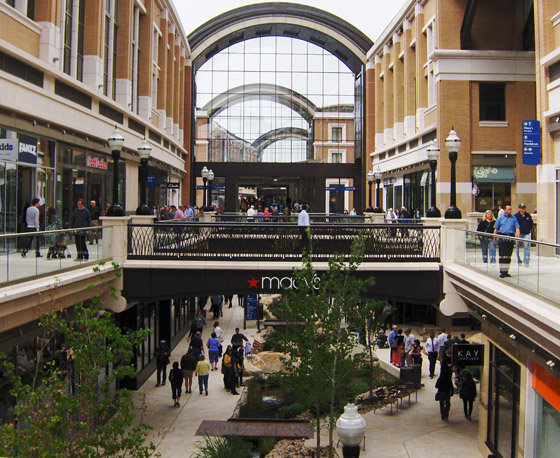 Except for the stores catering to teenagers, with their blaring music and vivid window displays, the majority of stores are understated, almost calm and serene. They blend into the architecture, allowing for the urban surroundings to be the focal point. That being said, there are a couple really unique stores that I have to give a shout out to.

In my book, Restoration Hardware has the best storefront. Maybe they look like this in every other state, but at City Creek, the design stands out from everything else. The other store that really jumps out is Tiffany’s. We all know they are famous for their Tiffany’s teal blue color scheme and they used every bit of their storefront to make shoppers aware of it. 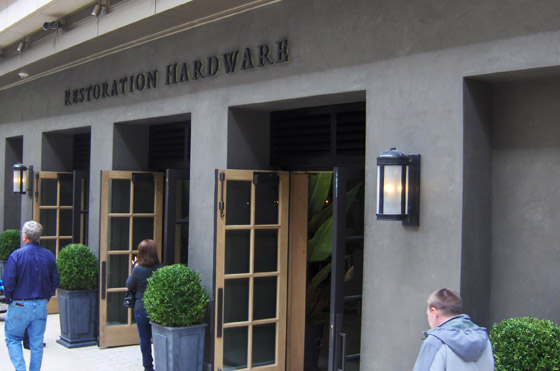 All in all, the City Creek Center development is well thought out and a joy to walk through. I do find it interesting that Salt Lake City isn’t the only city planning large urban projects centered around retail shopping. New York, Boston and Chicago are all planning makeovers in attempts to draw customers and lure investors back to struggling downtown areas. Only time will tell if these will pay off, but for City Creek in Salt Lake, all the signs point to yes!

Also, check back tomorrow for my exclusive one-on-one interview with Randy Castleman, operations director for Pandora – the jewelry company, not the streaming music site.