Sunday marks the 100th anniversary of the sinking of the Titanic. Just before midnight  on April 14, 1912, the Titanic hit an iceberg which punched several holes in the hull. By 2:20 am on April 15th, the Titanic sank to the bottom of the ocean. 1,517 people died that night. They weren’t killed by an iceberg; they died because of complacency, arrogance and disorganization. 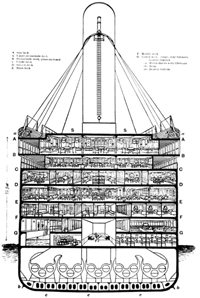 There were three factors that led to the tragedy. First, the captain and navigator didn’t heed iceberg warnings because they believed ship to be unsinkable. The Titanic had been built with twelve specially-designed compartments below deck. The idea was that if the ship hit an iceberg, the compartment with the hole would contain the incoming water. However, if more than four compartments were compromised, the ship would sink. No one ever imagined that such a scenario could happen. But when Titanic struck the iceberg, five compartments filled with water, rendering her incapable to stay afloat. The Titanic was supposed to be unsinkable. Complacency led to unimaginable tragedy.

Second, poor planning further contributed to the many deaths of Titanic’s passengers. Only 20 lifeboats were onboard – not nearly enough to hold all the passengers. The lack was mainly due to aesthetics – the designers wanted to keep the first class deck clear of ugly lifeboats. Ironically, first class passengers were much more likely to survive; the second and third class passengers drowned because the wealthy wanted to be able to sip cocktails with an unobstructed view. Arrogance led to needless deaths – many more passengers would have been saved had there been sufficient lifeboats.

Finally, disorganization and lack of training created chaos onboard the Titanic between the time of the iceberg strike and the sinking. The captain originally failed to call for evacuation, because he thought the leak could be contained. But once he called for the crew to begin putting passengers into lifeboats, another problem emerged. The crew had not been properly trained about evacuation procedures. They weren’t sure how many people would fit in each boat, so they under-filled the lifeboats. Most boats were launched only half full. There were also problems releasing the lifeboats and some got tangled up as they were lowered to the sea. Lack of training led to a disorganized evacuation that wasn’t as effective as it could have been.

The impact of the sinking of the Titanic was felt all over the world and continues to be a historical event of note. Important lessons were learned about safety equipment, training and engineering. But those lessons faded after time. Nearly 100 years later, the Costa Concordia sank, resulting in the deaths of 30 people (two people are still missing and considered dead as well). The captain of the Concordia was also arrogant and complacent. He wanted to impress his wealthy passengers, so he navigated too close to the coastline and ran aground, tearing a huge gash in the hull of the ship. Concorida’s captain, like the captain of the Titanic, also failed to evacuate passengers quickly. The crew was unprepared to perform evacuation, an unfortunate similarity of the Titanic.

What can business owners learn from these two tragedies? Here are a few tips:

No business is unsinkable. Even companies with long histories and market share can fail (remember Lehman Brothers?) Don’t get complacent with your business. Take time to build a business plan that includes all contingencies, including sinking (figuratively, not literally) and make sure that design is solid.

Arrogance leads to even greater downfall. Admit mistakes early in order to salvage your business.

Unless your business relies solely on wealthy customers, make policies based on everyone’s needs.

Stick to the basics – keep up with current standards and practices. The Costa Concordia didn’t bother to have a safety drill, so passengers and crew didn’t know what to do.

Give employees the power to make decisions. If they see that something is wrong, they should be able to take action. On both the Titanic and the Costa Concordia crew members stood around waiting for instruction when they clearly needed to be evacuating passengers.

There’s no guarantee that you can keep your business from experiencing a disaster. Sometimes bad things happen. What you can do is plan and prepare, so that if you hit an iceberg, run aground or just have a sales slump, you’re ready.