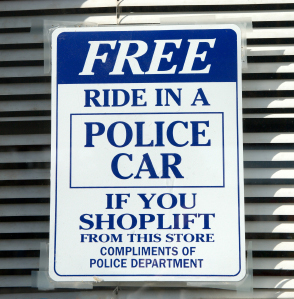 According to the National Association for Shoplifting Prevention (NASP), more than $35 million of good are stolen from retailers every day. That’s a whole lot of stuff going out the door. If you’re a retailer, you want to do everything you can to deter shoplifters. And with approximately 27 million shoplifters in the U.S., there’s plenty to deter.

But all too often, retail owners make it too easy for thiefs by falling prey to one of many myths about shoplifting. Save your business thousands of dollars each year by educating yourself on shoplifting, knowing what signs to look for and never falling victim to one of the 8 shoplifting myths!

1: My business isn’t the type that attracts shoplifters.

Maybe your merchandise is only really high-end stuff in a fancy neighborhood. Or maybe you own a thrift shop with prices so low that no one would dream of stealing. Shoplifters only hit teen clothing stores, drugstores and music shops, right? Nope. All kinds of stores suffer from shoplifters, so if you’re dealing with the public at all, odds are that you’re losing stuff to shoplifting.

2: Shoplifters are a certain kind of people.

You might think that all shoplifters are teenagers. Or that all have low-incomes or low levels of education. That they’re mainly female. Wrong, wrong, wrong. You simply can’t profile a shoplifter. While some are teens, others are 80 years old. Some are low-income and some have thousands of dollars in their bank accounts when they’re caught (even some celebrities have been caught shoplifting!) Men and women both shoplift equally.

3: Shoplifters are the ones who are trying to leave without buying anything.

Not always. Many make purchases while slipping other items into handbags, waistbands or under jackets.

4: With all this surveillance, I catch all shoplifters in my store.

Probably not. Shoplifters report that they’re caught an average of once every 48 times they take stuff. So you need to beef up your surveillance and put in a few more deterrents.

5: Shoplifters come into my store with a plan to steal.

Some shoplifters do have premeditated plans to take stuff, before they even walk in the door. But almost 75% report that they didn’t decide to shoplift until after they were in the store.

6: Shoplifters are criminals who commit lots of other crimes.

The NASP reports that most shoplifters don’t commit other crimes. In fact, most would never dream of taking something from a friend’s home. They turn in lost wallets and reported errors (in their favor) at the check stand. Shoplifting can be an addiction for some people – they like the rush of adrenaline they get while trying to steal something from a store.

7: Most successful shoplifters are part of a big shoplifting ring.

There are some people out there who are organized, professional shoplifters. About 3% of people who steal from retail stores are part of a much larger business that is sometimes even international in scale. That 3% of shoplifters is responsible for 10% of the financial losses, so it’s not entirely insignificant. But your bigger worry is the typical shoplifter who just decides to steal a soda while in your store.

8: Arrest and prosecution is a great deterrent to shoplifting.

Many people report that they are addicted to shoplifting. 57 percent of adults and 33 percent of kids say that it’s hard to stop . . . even after they’re caught. Those who are addicted say that they shoplift an average of 1.6 times every week.

Check back next week for an article that will outline ways that you can effectively decrease shoplifting in your store.

*All statistics come from the NASP. You can learn more on their website.