The Tour de France begins tomorrow in Liege, Belgium. Over the course of 23 days, millions of people will line the streets in Belgium and France to see the grueling race which covers 3,497 kilometers.

Everyone watching can take away some life lesson: the sheer prowess of the athletes inspires the spirit and renews feelings of admiration, dedication, hope and the will toward perfection of the human form.

But those life lessons are all pretty obvious. Instead, let’s look at the ways you can gain some business insights from the world’s most popular bike race.

When You Crash and Burn 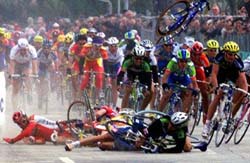 People just seem to be unable to look away from destruction and mayhem and the Tour de France is no exception. Major crashes and injuries draw tons of attention, both in the media and amongst spectators. Not that people are gleeful that someone is hurt. But watching someone crash in the most spectacular way makes people sit up and pay attention to what the victim will do next.

At the Tour, when a rider is injured or crashes and lays on the road, attended by coaches and doctors, a certain hush falls over the crowd. They marvel, “This is such a brutal sport!” It reminds spectators that they’re not capable of being out there . . . they’re sitting on the side of the road with a flag and a soda, not clutching their knees and writhing in pain. But when the rider climbs back on his bike (usually a new, undamaged bike), the crowd goes wild, clapping and cheering and flag waving. Why? It’s because seeing the guy get hurt in the first place reminds the Average Joe that he can’t do what the athlete can. And that the athlete, after all, is just human and made of muscle and bone (which sometimes is prone to tearing and breaking). The fact that the rider can still get up . . . well, that’s just one more miracle. Because Average Joe wouldn’t be tough enough to get up and walk away. After all . . . how many of us ride bicycles down hills at 55 mph? And how many can crash into three other guys, then stand up, shorts tattered, skin hanging off a knee while the blood trickles into his sock, adjust his helmet and get back on the bike? Well . . . pretty much none of us.

When you crash and burn in your business, everyone is watching. Your relatives engage in lots of gossip, “Did you hear that Tommy’s business is failing? He’s really in trouble now!” Are they happy that you’re having trouble? No (well, mostly no). It’s that most of them haven’t had the guts to start a business. They’re still working for the accounting firm and hating every minute of every day. The fact that you’re faltering means that you’re human. If you can find a way to get up, shake it off and continue on, your troubles will be the best thing that every happened to you . . . now you’re the guy who does what most can’t . . . keep going in the face of pain and mayhem. Don’t be afraid to publicize your crashes. Capitalize on them, instead.

Most people know Lance Armstrong’s story. The amazingly talented cyclist who went pro at the tender age of sixteen, he crashed and burned when he was diagnosed with testicular cancer at the age of twenty-five. The prognosis was not good. The cancer had metastasized to his brain and lungs and he was given less than a 40% chance for survival.

But after surgery and drug therapy, Armstrong went on to win the Tour de France in 1999. He holds the record (at seven) for the greatest number of wins on the Tour. People flocked to buy his book, “It’s Not About the Bike” to read about his trials and triumph. And he’s been the darling of cycling, at least in the U.S., ever since. Why? Because his story gives people hope. Lance might be a demi-God who has talent none of us can even dream of, but he’s also a guy who got cancer . . . something we can all certainly have. And he overcame it. Which had absolutely nothing to do with his cycling prowess. So now, we love him. Not because he’s a nice guy (he’s been accused of arrogance on more than one occasion). But because he survived. Which means that we can, too.

Your business is the same way. Your odds of survival are often less than 40 percent. Not great odds. So when you triumph, people love your story. They look at you and think, “Well, if that guy did it, maybe I can too.” Publicize your triumphs. People want to be uplifted by your story. Send out a press release, write up a blog post for your website, host a customer appreciation party to share the love.

What does advertising have to do with the Tour de France? Everything! The teams were originally supported by companies, but beginning in 1930, teams were to be sponsored by their countries, with the organizers providing the same bikes to every racer. In order to finance the enormous expense, the Publicity Caravan was created. The Caravan, a parade of vehicles that precedes the racers, rolls along, advertising companies and giving away freebies.

The cost is considerable. Companies pay €150,000 to place three vehicles in the caravan. In addition, the cost of the free items thrown to crowd members, the driving staff and decorations add up. But the Tour de France reports that 39% of spectators come first and foremost to see the caravan.

If nearly 40 percent of the Tour de France spectators are there to receive advertising gimmicks, what does that tell you as a business owner? There are ways to have your customers beg you to advertise to them! You just need to find creative ways to do it. While you probably won’t participate in the Publicity Caravan in France, you can certainly participate in your hometown parade. Give away cool stuff, and potential customers will watch for your vehicle specifically.

Number of wins per nation:

Just in case you are interested in seeing who is winning (wearing the Yellow Jersey), you can follow the race here: http://www.letour.fr/le-tour/2012/us/classifications.html